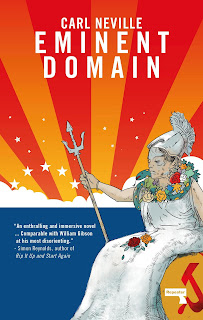 The present flickers on a knife edge between the dystopian and the utopian - and here's Carl Neville with a new novel for Repeater that hurls the reader into a counterfactual world circa now that in some ways is close-to-utopian, but also contains within it dystopian aspects - or regions - far worse even than the worst that last week momentarily seemed to herald.

Here's how I blurbed it:

“Alternative history usually involves dystopian scenarios – counterfactual realities in which the Nazis conquered the world, the South won the Civil War, the Reformation never happened. Eminent Domain is that rare thing — a near-utopian version of the present more advanced and progressive than our own, rendered with a level of vivid and intricate detail comparable with William Gibson at his most disorienting. But where speculative fiction typically presents a warped mirror image of our own era, Carl Neville’s enthralling and immersive novel does something different – it makes you aware of the radical potentials, the different way things could be, that lurk latent in the world as it stands. Eminent Domain makes this present in which we currently languish feel like the impostor reality.”

More information and how to purchase Eminent Domain at the Repeater Books site.

Carl has started a series of blog essays that detail his journey through life, art, writing and thought that led to where he is now and the work he is doing. Here is the first installment.  He's also just blogged a couple of Spotify playlists related to Eminent Domain and its precursor-sibling novel Resolution Way.

Carl will also be convening a series of discussions on the theme of utopia to take place live on YouTube -  including one next week on music and the utopian in which I will be participating. More details on that to come.

Music and the utopian, eh? It's such an open-ended term and if you're not careful you can start thinking of any music that is vaguely suggestive of paradise or heaven. But in terms of music that actually proposes or enacts a model society, for months now - since doing the memorial lecture in fact - I have been obsessed with this song.