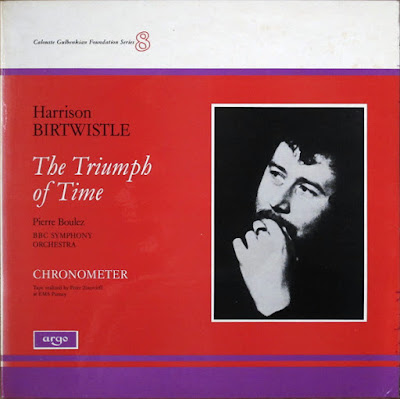 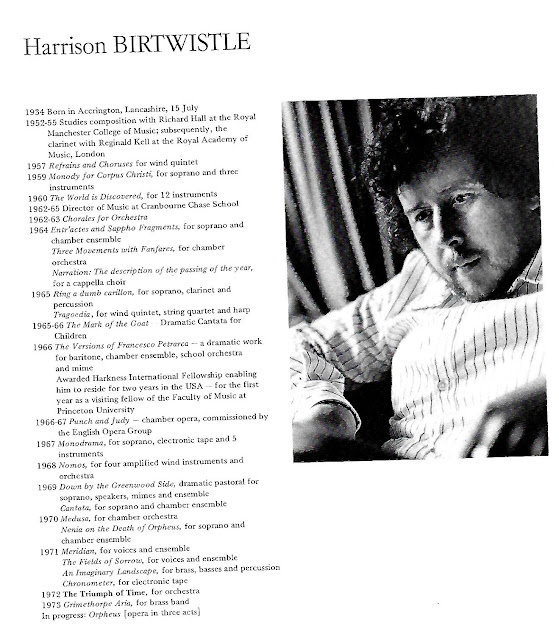 Admittedly, I've not made a thorough investigation of Sir Harrison Birtwistle's uuurv - so the salute is really for this one visionary piece of electronic music: "Chronometer", made with the technical assistance of Peter Zinovieff (who himself died less than a year ago)

"Chronometer 71 is a 1971 piece that comprises recordings of clocks in London's Big Ben and Wells Cathedral in Somerset. These were sequenced to a graphical score by Birtwistle using Zinovieff's studio system to control several tape machines, much like an early sampler. The piece was created in Zinovieff’s second Putney studio, Musys, set up in the basement of 49 Deodar Road." - The Wire 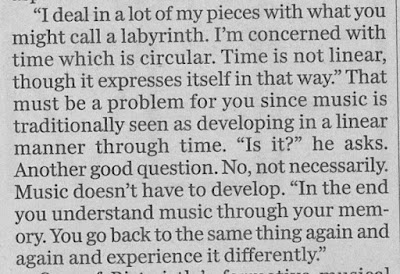 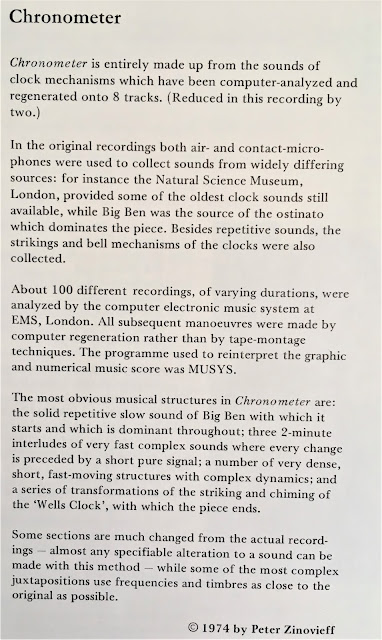 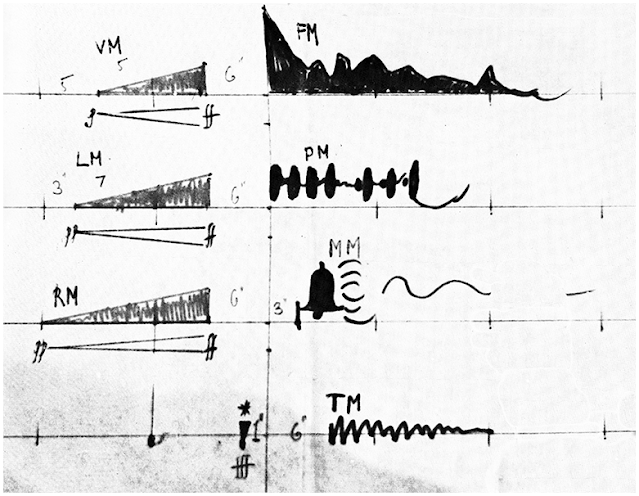 He had a thing about clocks, old Birtwistle

Flipside of "Chronometer" is "The Triumph of Time"

"Harrison’s Clocks (1998) is not Birtwistle’s only composition to deal directly with the subject of the timepiece through music. His two works referring explicitly to clocks are, however, very different. Chronometer (1972) is a work ‘at least as much ‘about clocks’ as it is about an abstract structure of pulses’ (Adlington, 2000: 98), and like the more recent work, can be heard to have many layers of meaning. While both works employ audible pulsation processes, Chronometer, being a tape piece, is actually constructed from ‘the sounds of real clock mechanisms which have been computer-analyzed and regenerated onto 8 tracks’ (Adlington, 2000: 98). The resulting similarity of sound, between the musical world of the composition and the real world of mechanical clocks, creates an immediate association in the mind of the listener between commonly distinct temporal experiences.Whereas the clock in itself stands as a symbol of ‘ontological’ or ‘absolute’ time (that is ‘objective time, the time that is shared by most people in a given society and by physical processes’ (Kramer, 1988: 452)), the compositional treatment and layering of the pulses, and transformation of the sounds contradicts such a time concept and, in so doing, enables time to, in Birtwistle’s words, ‘transcend itself’ (Hall, 1984: 73). As Jonathan Kramer has pointed out, the medium of music has a special relationship with time and ‘offers alternatives to conventional temporal sequences’ (Kramer, 1988: 6). Chronometer exploits this possibility by ‘[making] time timeless, taking externally regulated clock time into the subjective realm of the unconscious’ (Cross, 2000: 184). As a result, the music may lead the listener to question the socially prevalent view that the ontological time of the clock represents absolute temporal reality, against the more subjective time of individual experience. And thus, the listener might come to experience subjective time as constituting reality in its own right. Michael Hall sums this up succinctly: ‘we are so used to measuring things in terms of clock time, that we forget that time is multi-dimensional; things change at different rates’ (Hall, 1984: 74).

If Chronometer can be seen to challenge, in a fundamental way, the listeners preconceptions as to what time is through multi-layered pulsations, another work of the same year – The Triumph of Time – explores the nature of the motion of time through it’s juxtaposition of linear and cyclic processes. From a compositional point of view what this piece is really exploring is the nature of change and progress in a musical context – both rates of change, and more significantly, degrees of change – and how context affects perception. This is achieved through the employment of certain distinctive musical ‘objects’ recurring cyclically over layers of ostinati in (varying degrees of) continuous flux. As a result, the perception, or interpretation, of this work’s form and meaning depends heavily upon the processes of the listener’s memory (as, to an extent, does all perception) and the recognition of the changing contexts in which the memorable ‘objects’ recur...."

- Christian Mason, "Harrison’s Clocks: a perspective on their Context, their Time, and their Mechanisms" (2005)