MAY EVENTS:  BERLIN AND ESTONIA

Later this week I’ll be giving a talk in Berlin as part of the Apocalypse Now (And Then) festival. The week after, I’ll be in Tartu, Estonia, to give a talk as part of the Prima Vista literary festival

It is followed at 9pm by a discussion with myself, Jens Balzer, Falko McKenna and Tobias Rapp.

(The next day I’ll be heading on to Tallinn, and the day after that, making sure to rise at 5-AM so I can see what it looks like at dawn)

"Pirate radio is being replaced with a primary medium that is indistinguishable from media used by all other musical continuums, road rap is absorbing grime’s road energy into hip-hop’s traditions, house continues to satisfy ravers’ need to dance without a strong sense of local identity, breakbeat/bass science rudeness or flava. Grime and UK funky continue to iterate in interesting ways, ways that show real promise but can’t claim the seismic bursts of intense energy they once saw. Dubstep fans who reject brostep have dispersed into either purist halfstep traditionalist stasis (“the dungeon sound”), floating islands of the post-dubstep archipelago, trad European house  and techno, homogenizing crate-digging revivalism and eclecticism, US trap rap and juke. So what’s next?"


"What all three tracks share in common is a profound, almost militant, resistance to the immediate, booming gratification that the vast majority of contemporary club music promises. Turning bass-music formulae inside out, they represent the anti-drop. But here's the other thing: these tunes are so extreme, in their own ways, that they don't exactly invite imitation. They're difficult and hermetic; they don't play well with others"--Philip Sherburne, fromThe Genre That Shall Not Be Named (Dubstep)


of course what he's talking about does have a name,  an unsatisfactory placeholder name: postdubstep

nu-IDM is what I used to call it for a while and i couldn't help flashing on that in this description:


"Objekt's "Cactus"... was the first to catch my ear with a weird inversion of dance-music energies: its bass wobbles with the ferocity of the down-and-dirtiest dubstep, but the rest of the tune feels gutted and hollowed-out.The drum track seems to be missing information, as though a mute button had been pressed or a patch cable had come unplugged; for all its heaviness, it's a weirdly enervated tune, gliding listlessly like a sailboat stuck in the doldrums. I've never heard it in a club, and I can only imagine that it would be tough to play effectively"

Phil pinpoints what may well be the most interesting and revealing characteristic of these hybrids, which is that they are one-offs...

"Jabbed like iron rods into the clockwork of the night, they feel less like seeds for potential subgenres and more like weed killer, burning off the overgrowth."

hybridisation, in the era when analogue mediation still dominated, seemed to take the form of, well,  forms...  new forms... these became the focus, the centripetal attractor, for  a collective surge, a swarming...   scenius logic: a strong new template  off which myriad minor variations could be "seeded" (to use Phil's organicist metaphor)...  this then created a monolithic vibe (Amentalism... Wobblism being the last of these -isms?) that was both impressively/oppressively total at any given rave or club night...  but that also had staying power (a new template like breakbeat science, or bass-science, could last five or six years before all the potential permutations got played out)

hybridisation, in the post-broadband era (which quickly led to the not-quite-total-but-near-enough eclipse of analogue mediation) seems to rarely lead to anything.... anything much.   Hence the the one-off hybrids.... they are non-generative, non-genre-ative....  instead, there's an interminable series of momentary agglomerations...  a particular collation of networked influences mesh inside a producer's digital audio software...

offering further thoughts on this zone and "the anti-drop" Rory Gibb at Quietus notes how "these very UK-sounding hybrid forms don't exist in a vacuum. They're all held suspended by a tangled web of reference points, connections and affiliations. More so than, say, many early dubstep and grime producers [i.e. early 2000s, before broadband really seriously eclipsed the analogue channels-- hard to remember, but emergent/golden-age grime barely had any web presence], many of these producers have a deep knowledge of music stretching far beyond their immediate surrounds."

the more connectivity in the post-geographical sense (and atemporal, archive-raiding sense), the less connection to a here-and-now....  the more that artists are drawn out of a fully current, geographically-situated musical conversation... (a continuum)

as well as undermining the conditions for scenius to emerge, this centripetal, dis-integrative logic (inherent to digiculture, to networks?) seems to extend the other direction too... to worm itself inside the practice of the individual producer...  conceivably, it's as anti-genius as it is anti-scenius

for, at the extreme, even the artist doesn't develop a personal style... doesn't repeat themselves... each new track is another genre-of-one

style is related to a measure of inflexibility, a measure of predictability...  that's how we recognise artistic signature.... but in the ultra-flexibilized conditions of digiflux, the artist is encouraged to endlessly differ from himself or herself, is pulled every-which-way by the same forces that (as described in Martin Blackdown's piece) are dis-integrating the nuum

Q:  So hardcore was the real beginning for you.

A:  Hardcore was what got me started buying music on vinyl, yeah. And it was literally ‘cos you couldn’t get it anywhere else. I didn’t have decks at the time, I couldn’t mix; I was like 11 or 12 years old. But I used to save my pound lunch money every day, ‘cos the records were a fiver, and on Fridays I’d go down to Wax City Records in Croydon..... At the same time I was picking up flyers and it was like the same thing with that, I started collecting flyers and just….being part of it. Being part of that hardcore thing...  It was all about, if you’ve got it, then you were hardcore [laughs]. What I try to do at the moment [with Swamp81] – it’s a similar kind of ethos. The music’s there on vinyl. If you want to go and get it, you can; I’m not gonna shout about it, I’m not gonna try to get it into HMV or whatever the fuck the high street record store is now [laughs], I’m not gonna go digital, I’m not gonna do all that shit… so it’s like, it’s over here. If you want to be part of it, you can be, but you’ve got to make a bit of effort. And that’s kind of what hardcore was about. If you made the effort to find your local independent record shop, if you made the effort to get the flyer to go to the rave – ‘cos without the flyer you literally wouldn’t know about it, there was no internet, there weren’t many adverts, at least not for the smaller raves – then you were hardcore. If you did make that effort, then you were accepted, you were in a kind of gang, a club. It was a special thing, and it was linked into the record shops, the vinyl, the pirates, the flyers – it was all this one thing together. That was hardcore for me.

my Spin review of Traxman's album for Planet Mu 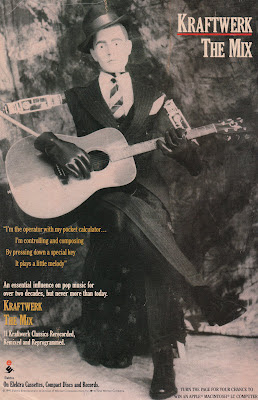 Over the next two weeks I'll be visiting Harvard to deliver the keynote speech at a symposium on art + pop and going to Chicago to talk about Retromania at the Museum of Contemporary Art.

1/ TINNITUS: a symposium on art and rock’n’roll

admission: free and open to the public (but advance registration is advised)

for further information about the other symposium participants and the panels lined up that day, go here

coming soon: details of my European mini-tour in early May: appearances at the Apocalypse Now (And Then)conference in Berlin (3rd to 5th) and at the Prima Vista literary festival in Tartu, Estonia (7th)

Posted by SIMON REYNOLDS at 11:50 AM Links to this post


Posted by SIMON REYNOLDS at 8:07 PM Links to this post
Labels: MY WHITE BICYCLE, TOMORROW

" 'Ick' means something. It either means you’re offended politically or you think something was morally compromised, or you find someone unattractive. So why don’t we articulate this 'ick' a little?"
-- Lena Dunham, on reactions to the sex-not-sexy scenes in Girls

from "The Ick Girl", a Q & A megamix of conversations between Dunham and Joy Press, at Show Tracker (LA Times TV-etcetera blog)
Posted by SIMON REYNOLDS at 1:00 PM Links to this post 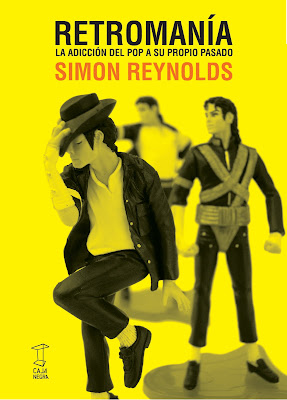 The Spanish translation of Retromania, published by Caja Negra, "premieres" at the Buenos Aires Book Fair on April 15th, and will be available in bookstores in other Spanish-reading nations in May.
Posted by SIMON REYNOLDS at 8:44 AM Links to this post

the missus interviews Lena Dunham, creator of Girls
Posted by SIMON REYNOLDS at 11:21 AM Links to this post

hipster hardkore (w/ Julianna Barwick as 4AD-ethereal-girl --as per lisa deadcandance on FSOL's "Papua New Guinea" or liz cocteau on messiah's "temple of dreams" -- except not sampled but the guest-vocalist)
Posted by SIMON REYNOLDS at 11:41 PM Links to this post
And another -- Bat says "you forgot Attack The Block!" which is "brilliant"

Posted by SIMON REYNOLDS at 11:20 AM Links to this post
excellent mix by Mordant Music at Vice Italia

Posted by SIMON REYNOLDS at 10:54 AM Links to this post
a lovely pair of pieces from Neil Kulkarni on Oliver Postgate and children's teevee then and now

Posted by SIMON REYNOLDS at 10:53 AM Links to this post
on the topic of xenomania / nu-exotica:

which makes him a perfect icon for connectivity: the same data-flows that join together the world financial system and enable the flightiness of capital also allow for the mobility of cultural capital from local scenes to global ubiquity... at the start of the Blackberry commercial, he speaks of traveling the world "collecting influences"

reminded me of what Arthur Kroker and Michael A. Weinsteinwrote in the early 90s (in Data Trash) about how digital music technology prefigured transformations to cultural economy under globalisation: sampling as "the harvesting of energy from the local and the bounded for the global and unbounded"; samples as "archived body parts... disguised in the binary functionality of data and pooled into larger circulatory flows"; samplers/deejays as "vivisectionists, vampiring organic flesh, and draining its fluids into cold streams of telemetry..."

"Ours is a time of non-history that is super-charged by the spectacular flame-out of the detritus of the bounded energy of local histories"
Posted by SIMON REYNOLDS at 10:50 AM Links to this post
Newer Posts Older Posts Home
Subscribe to: Posts (Atom)