wish you a merry blissmas

Posted by SIMON REYNOLDS at 11:01 AM
Labels: BLISS, CREEL PONE, FAVES 2018, FAVES OF THE YEAR, JOUISSANCE, MIGOS, MOUTH MUSIC, THIS WAS TOMORROW, TRAPEDELIA

big up all haunty cru

A festive mix from the Man like Ian Hodgson, reminding me I've been remiss in not proclaiming the existence of a new Moon Wiring Club album, Psychedelic Spirit Show, which arrived at its customary time of year a few weeks ago and is ruddy excellent.

Even though PSS doesn't sound anything like it, the origins of the album lie in a just-for-fun exercise in making "drum & bass / jungle / raveish / whathaveyou tunes", Ian informs. The resulting 25 or so tracks  - never intended for release, designed merely as a "meditational vibe / head-space cleaner process" - then became the mulch out of which grew a completely other project.  Approaching the source material as if doing a mix, Ian took bits from one track and put them together with bits from different tracks. "I split each track into 3 sections ~ rhythm / melody / effects (voice samples and that) then applied numerous knackering techniques and filters, and began to construct whole new shonky-hybrid tunes overlaying a melody from one track with the rhythm of another.  I called this process (wait for it) ‘unconscious compositioning’ -  a way to distance myself from the predictable choices that you inevitably make when composing music for a number of years, and then being able to surprise myself with choices I wouldn’t wholly ever have made."

Less loftily, Ian also described the manky making of the album as "a bit like getting the dust out of an antique carpet with one of those wicker tennis racquet carpet beaters".

In an analogy that really couldn't be further up my alley,  Ian further describes the final sequenced album as reminding him of  "a car tape I had in the 90s. On one side was Grooverider The Prototype Years and on the other a selection of 60s/70s light entertainment tunes. If you imagine that tape festering in a glove compartment for 20 years until both sides play together simultaneously at the wrong speed..."

The Dream Perception Machine mix is also splendid seasonal stuff with a loose "Psychedelic Telly" thematic. In an apt time-twisty metaphor, Ian describes the contents as "retroactive inspirations" - the kind of stuff that could have informed the making of the album, except they didn't.

But - breaking with customary seasonal release rhythms - there looks likely to be a Moon Wiring Club compact disc in the spring.


I've often wondered about the half-swallowed askew-vowel / eroded-consonants thing in pop today - most exemplified by Billie Eilish, whose surname almost spells/sounds like one of her own delicious, absurdly self-delectating, smudge-mouth choruses, but there's loads of other exponents, from Selena Gomez on "Good For You" to Let's Eat Grandma.  Where did it start, why did it start, what does it signify... Well, here's a really detailed genealogy and analysis of vowel-breaking (as some call it) by an academic whose blog Ace Linguist is dedicated to the technical and physical intricacies of voice-production. There are, like, diagrams of the vocal tract and shit!

I've noted before that the concept of "world-building" has become a bit of a cliche in musical and music-critical discourse. And elsewhere I've suggested that conceptronica might have reached a point of exhaustion (it's certainly exhausting).  Here's an interesting polemic by Nick James Scavo in the Tiny Mix Tapes end-year round-up: an essay that declares itself to be "Against Worldbuilding."  At the risk of simplifying an involved and world-size argument, Scavo targets the totalizing hubris and over-coding that goes into these grand projects: "the verbosity of sound as it exists in sonic world-building".

Here's my tribute at Pitchfork to Pete Shelley and the timeless newness and nowness of Buzzcocks.

Getting older, as a person and as a writer, means having to get used to not just losing people, but writing about the loss of them.

The last month for me has been substantially taken up with commemoration of Mark Fisher and now Pete Shelley.

Strange indeed that the last time I should have seen both of them alive was at the same place - the Incubate festival in Tilburg, Holland, September 2012.

Writing about a dead person that mattered to you - personally known or not - is a odd business.

On the one hand, you're confronting loss, and trying to measure and convey in words the dimensions and the particularity of the loss.Which is a gloomy business. But on the other hand - being a writer and all - there is joy and satisfaction in finding the right words. A pride that can feel inappropriate, given the context, but in its own way is a defiant flexing of the life force.

Well, eventually there is joy and satisfaction. At first there is struggle - the usual struggle, but more severe in this case, because more is at stake: this is a life, and a life's work, in review, not just a recording or a performance.  There is a sense of gravity. The Shelley piece was an all-nighter. That used to be how I wrote everything that was larger than a record or gig review, back in the Eighties. But over the last 25 years or so, this kind of all-night ordeal became a vanishingly rare occurrence for me. This was a flashback and... well, let's just say it was touch-and-go for a moment there.

It's sobering to consider that I'll be doing more and more of this kind of writing in the years ahead. That's just the way life will be going, from here on out. It'll be.. going. More and more gaps will appear in the company of the valued and meant-a-lot. Life, increasingly replaced by death. Presence, outnumbered by absence.

Alongside public memorials, there'll be private occasions for writing about lost people - eulogies addressed  to smaller, more intimate and exclusive audiences. Twice in the last three years I've faced the challenge and the duty of summing up, or catching aspects of, a life.

When we write these things, or read them, we are of course mourning ourselves too, as well the lost precious individual. Confronting the passing of our time. All the things that mattered, all the people who kept us company on our journey -  in real, first-hand ways, or in remote and mediated ways that are nonetheless just as intimate and essential.

This is the first Buzzcocks song I ever did hear -  when my brother Tim (another person who's gone, eight years now) brought the single home. There's still something wonderfully insolent and adolescent and bratty about "when your mummy says 'noise annoys; - GO" and the blare of guitar that follows.

I love all the obvious Buzzcocks classics, of course, but this one is a fave that I haven't seen other people posting. Love that endlessly cycling guitar figure needling away like a twilight-zone thought-beam.  Apparently "ESP" has the longest fade in recorded history.

This is such a strange and lovely piece of music - such a gorgeous yearn. I can't think of anything else quite like "Why Can't I Touch It?". Love the super-stereo-separated jousting of guitar-riffs, with that unique Buzzcocks feel of clumsy and delicate, stiff and graceful.

Another of the killer B-sides

Late gems on A Different Kind of Tension

What makes first-wave punk-pop like Buzzcocks so different from the melodious emo-punk of the Nineties, its ostensible descendant, is that the Nineties lot (G.Day etc) can really play but are choosing to restrict themselves within an established genre format. Whereas Buzzcocks you can hear them straining against the limits of their ability - and creating that genre template as first-time cultural event. You can feel the freshness still.

Sung by Shelley, written by Diggle

Here's the performance of "Harmony In My Head" from Tilburg with the declamatory middle-bit and guitar-hero poses from Diggle. It doesn't sadly capture the incredulous Shelley comment.

Shelley and the band were staying in the same hotel as me and on the last morning I saw him and a young friend having breakfast in the basement parlour. I did toy with the thought of going up and saying "great concert, thanks for the music" etc etc. But Shelley seemed so quiet, so inwardly focused, that I decided to respect his privacy. Regrets, I've had a few...

Some great TV documentary clips about Buzzcocks and Manchester punk.

Love the way Tony Wilson has gratuitously shoved in some Situationist graffiti slogans at various points throughout.

Pete Shelley as fan - pages from his fanzine, NME Portrait of a Consumer, his testimonial about Can from the 1978 compilation Cannibalism. 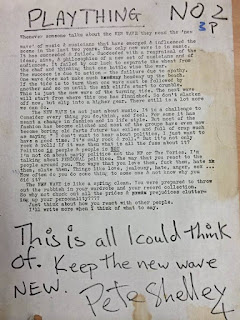 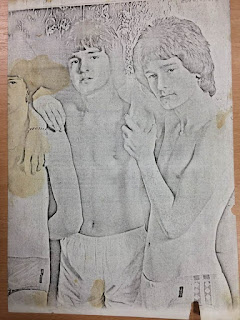 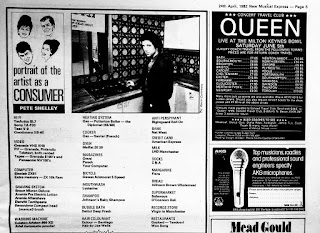 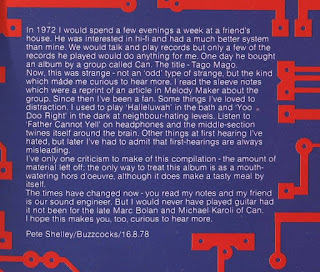 His Krautrock fandom also surfaced in this side project with Eric Random - The Tiller Boys. "Big Noise From The Jungle" was in regular rotation on the John Peel show and I was pleased to pop it in an imaginary list of the DJ's favorites of the postpunk era in Rip It Up, although I have no idea if Peelie would have agreed about any of the inclusions. In the book I described "Big Noise" as a clangorous Neu!-like stampede or words to that effect. But of course in 1980, sixteen-year-old me would have had no idea of Neu! existence or what the record's makers were aiming for or inspired by. It was just a glorious clamour. There are advantages to knowing nothing.


Here's a great interview with Shelley by Taylor Parkes from only a few years ago, for the Quietus.

Parkes: "At 15, Buzzcocks seemed the perfect music for 15 year olds who were classically randy and anxious and brash and uncertain, and definitely looking for something, but not inclined to heavy metal posturing, nor – that much – to the deep-and-meaningful pose. Fast, rude songs about the urgency and horror of new hormones; a way to come to terms with your preposterous new self, without so much of the narcissism or the ludicrous bravado. I'm not sure I could ever love Buzzcocks quite as much as I did when I was 15. And for some bands that would constitute a diss, but in this case I think it's a compliment."

And here's an interview with the whole band from 1979 on Canadian television.