I expect most in this community will have heard the terribly upsetting news about Mark Fisher, aka K-punk.

My first encounter with Mark was actually unawares – in 1994 I wrote a piece for Melody Maker about a group he was in called D-Generation, in which many of the ideas and themes that would obsess him in his later writing were rehearsed. But the phone interview was with another member of the group, Simon Biddell. Years later Mark shyly revealed that I had actually written about him, in effect, and I went back and checked the piece and there he was, in the photo. With long hair! But then we all had long hair in the early Nineties.

I first met Mark when doing a profile of the Cybernetic Culture Research Unit, aka CCRU, in the late Nineties. He stood out - even in a milieu crackling with intellectual energy – for his eloquence and urgency. Already the hallmarks of his work were evident in his conversation and in the tracts he penned for Cccru publications: the lucidity, the rigour, the exuberance, the capacity and the compulsion to connect things across far-flung fields, the ability to focus in with vivid attention to aesthetic particulars and zoom out to the widest possible scope.

Then we became proper friends – and comrades – during the early blogging days of the 2000s.  K-punk was the hub of the community, fizzing with fervour and argument; Mark was a dynamo, hurling out provocations, ideas that demanded engagement. He became a cult figure. A catalyst.

With Matthew Ingram aka Woebot - the community's other hub, with a similarly effervescing comments box - Mark co-founded Dissensus.

That era then led onto to Mark’s brilliant books for Zero and Repeater - Capitalist Realism, Ghosts of My Life, the collections he edited and co-edited on Michael Jackson and Postpunk. And now his new book The Weird and The Eerie. Books that have cemented his standing as the most original and provocative writer about popular culture - and its interface with the political - of the last fifteen years.

The exciting thing about Mark's writing - Cccru era, K-punk era, in magazines like FACT and The Wire, the books - was the feeling that he was on a journey: the ideas were going somewhere,  a gigantic edifice of thought was in the process of construction. That Mark was thinking big, building a system, always aiming for the largest scale. And finally that this work, rigorous and deeply informed as it was, was not academic, in the sense of being done purely for its own sake: its urgency came from his faith that words really could change things. Reading Mark's writing made everything feel more meaningful, supercharged with significance. It was a rush. An addiction.

The last time I saw Mark in the flesh was at the Incubate music festival in Tilburg, Holland, in 2012. We had a long chat, intermittently soundtracked by a live performance by Raime. He talked about his plans for future books, and passingly mentioned – in a completely unassuming way – that Capitalist Realism had [at that time] sold ten thousand copies. I’m not sure he fully grasped what an extraordinary achievement this was, for a theoretical book about politics and mental health on a small publisher. This was down to word of mouth, his own charismatic public appearances, the originality and timeliness of his ideas combined with the clarity and passion of the writing. [Within a decade, internationally, with translations, the sales of Capitalist Realism would be over 100,000]

At the festival I gave a talk, relying as always largely on a pre-written text; Mark followed and spoke off the cuff, riffing away, leaping from subject to subject, making electric connections, in a performance that he later likened to a stand-up routine.

On page and in person alike, Mark was a brilliant communicator.

I can imagine he must have been an inspiring teacher.

The last time I communicated with Mark, a few months ago - during which he alluded to his struggles - I told him I had been wanting badly to hear what he had to say about Corbyn, about so many things at this present critical time – musical, cultural, political.

I shall miss all the writing that Mark would have done, the penetrating insights and surprising connections, always that sense of the big picture. The wit and the style too: his writing was always an entertainment as well as a challenge.

But I shall miss Mark the person more. He was kind, generous, sweet, funny – these are not always things that go hand in hand with genius.

Our hearts go out to his wife Zoë and little boy George; to his family and friends; his colleagues and students; and to his fans and readers.

Below is a photo from a party Joy and I (and Kieran) held during the summer of 2002, which was the last period we lived in England for any length of time. There’s Mark, and Kodwo Eshun, and Anjalika Sagar, and Steve Goodman aka Kode 9. A clusterfuck of genius! 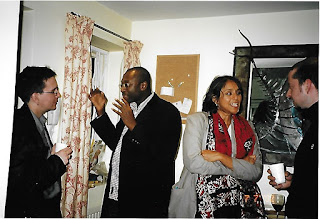 A couple of Mark's favorite songs.