A bonzana of stocking-filler books out this season. (So many that I'll have to do this in installments).

Let's start with this - 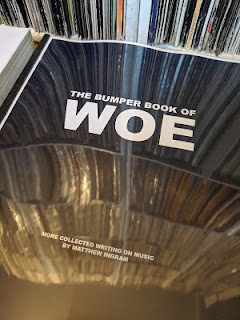 The sequel to The Big Book of Woe, here's another hefty slab (albeit virtual slab, since it's a Kindle) of Matthew Ingram's bloggeration: The Bumper Book of Woe: More Collected Writing on Music. - for the bargain price of 2.99 (that's in pounds and dollars) More information and how to get virtual-hold of it, here. I can't comment on the contents as yet because when I bought one it never actually downloaded into my Kindle (probably owing to the ancientness of the iPad). But it's Woebot so you know it'll be good.

Consider it an amuse-bouche, if a copious one - nearly 80 thousand words! - for Matt's debut book proper:  Retreat: How The Counterculture Invented Wellness. Out on Repeater next year. 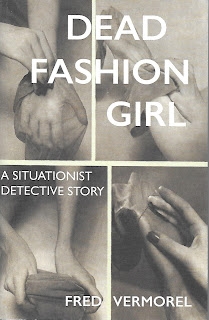 As pop culture thinkers go, Fred Vermorel is right up there, among a very select company of the greats.  I own almost all his books (haven't chased down that slender Adam Ant biog, and only just noticed he did a similar quickie on Gary Numan; I draw a line at Kate Moss). Even more of a testament, I've actually read nearly all of the ones in my possession, which is unusual for me - my rate of buying and acquiring far exceeds my rate of reading.

The towering achievements are those most unorthodox biographies The Secret Life of Kate Bush (and the Strange Art of Pop) - which contains a theory of pop and meditations on suburbia alongside Kate-analysis and Bush-clan archaeology - and Vivienne Westwood: Fashion, Perversity, and the Sixties Laid Bare. But Starlust, the book Vermorel assembled with his former wife Judy out of the raw written and spoken materials of fan desire and delusion, was a revelatory intervention when it dropped in the mid-Eighties (and Fandemonium, the sequel, was a nice bonus wedge of 20th Century delirium).

You couldn't call Fred a music critic, really, or even a music historian: he's not got much to say about sound as such. But when it comes to pop as myth, pop as an image-industry, a machine for personality-production and the mobilization of mass desire, and how that functions and the purposes it serves in late capitalist blah blah blah... well, he's got very few rivals indeed.

So a new book by Fred Vermorel is an event, and Dead Fashion Girl: A Situationist Detective Story (Strange Attractor Press) does not disappoint.The subject is the unsolved murder of a young woman, Jean Townsend, who commuted from her hometown Ruislip to move within the fashion and nightlife worlds of 1950s London. This true-crime investigation seems to involve a return to the primal scene of Fred-as-writer: a moment that sparked his particular sleuthing approach to research and narrative (not an uncommon move for writers as they reach a certain age - a return to the source of why you do and how you do what you do). On the first and second page of the book, Fred recalls his 8-year old's fascination for the story. His dad comes home from work carrying his usual Evening Standard: "After dinner I spread the paper over the kitchen table looking for clues that might have eluded the police. More than half a century later I'm still looking".

The quest plunges Vermorel and his readers into a glamorously seedy post-WW2 London where clubland and gangland intersect. It's a world already half-familiar from the TV series The Hour and the Princess Margaret / Antony Armstrong-Jones bits of The Crown,  from films like Peeping Tom, Let Him Have It and that one about Ruth Ellis, and from The Phantom Thread. The damage of the war still visible in uncleared bombsites (there's a horrible story of a boy getting trapped in a pocket at the base of a Lido pool, caused by a bombing raid, and drowning). Rationing continuing deep into the Fifties, along with the black market and the spivs. Mayfair and Soho clubs where  aristos and gangsters rubbed shoulders (and sometimes other body parts). The London of Polari and private-member "theatre clubs" that were actually gay clubs. Of strip joints and narrow alleys in the West End with notorious public lavatories. A demimonde in which the pre-Profumo Stephen Ward moved. The story with its scabrous anecdotes (orgies! slashings!) and gossip, drawn equally from archival materials and numerous interviews with contemporaries of poor Jean Towsend, shows that Larkin's semi-serious line about sexual intercourse being invented in 1963 was always a load of cobblers. The difference between Fifties and Sixties is really the level of secrecy involved. Every kind of pleasure and vice and kink could be catered for, if you knew where to go. London was rampant, well before it started to "swing" publicly and openly.

Dead Fashion Girl digs through the crust of cliche with an astonishing depth of archival research that cakes the pages with news clippings, magazine photo spreads, advertisements, official records, theatre programmes, and photographer's contact sheets. The texture of the era is vividly evoked. I'm only about a third into the book so I'm a ways off the "whodunnit" bit, the big reveal, where Vermorel outlines a promised "compelling solution" to the murder that also explains the puzzling and perturbing shroud of official secrecy that has placed many records and documents out of access to the public for years to come. But I'm racing towards it. 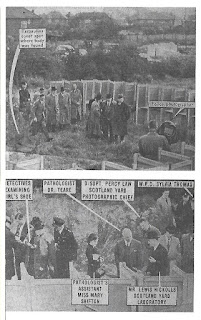 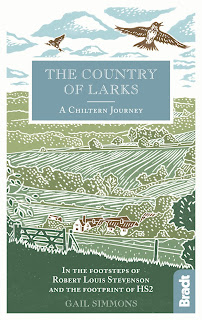 Dead Fashion Girl is a bulky book that would distend a Christmas stocking alarmingly. But Gail Simmons's The Country of Larks: A Chiltern Journey ((Bradt) would actually fit into a stocking snugly. It's a pocket-size delight with a pleasing jacket-less hardback design printed directly onto Wibalin (apparently what hardbacks are made of these days) and whose surface has a faintly embossed feel to the touch.  You can get a slight sense of that from the scan I did below. 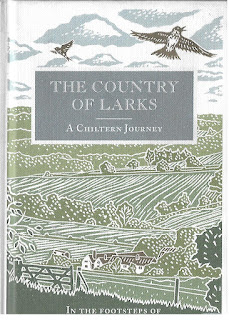 In the interests of full disclosure, I should mention that I know the author , although only slightly  - Gail is the sister of my boyhood friend Mark, a  figure in the background as the two of us listened to The Stranglers and The Doors. Gail grew up to be a travel writer. Like many of us raised amid the hilly landscape of West Hertfordshire, she has been indelibly marked by the countryside. Our appreciation for it has taken a keen  bittersweet edge as the years pass, with more and more of it getting nibbled away by development and environmental attrition. The title of the book is a reference to the virtual disappearance of the skylark and its song, although  - as if in compensation - the reintroduced kite has flourished and is omnipresent in the region now. It's also a reference to Robert Louis Stevenson and a journey made by the sickly author in the autumn of 1874, as recounted in his "In the Beechwoods": during the course of his three-day hike, he heard endless larksong.  As the sub-subtitle, "In the Footsteps of Robert Louis Stevenson and the Footprint of HS2", indicates, Gail painstakingly reenacts Stevenson's journey, painfully aware of the  damage about to be inflicted upon this Area of Outstanding Natural Beauty: the construction of the high-speed railway  HS2, which will plunge right through some of the prettiest bits of the Chilterns - lanes and meadows and copses that have remained unchanged in centuries. 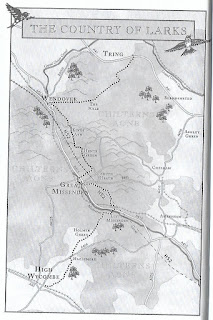 The book is a joy to read, attentive to tiny details of the landscape, and crammed with historical morsels and etymological delights to do with the names of places, rural practices, and features of the landscape - nearly all unfamiliar to me despite having grown up there. But I think even if you don't hail from that area, anyone who loves the landscapes of the  British Isles would get something from reading The Country of Larks.

But it's an elegiac read too, the shadow of the pointless high-speed train looming over every page.  I say, "pointless" - although HS2 will only shorten the journey time from London to central Birmingham marginally, because the train stops outside the city, and is seemingly of absolutely no use to the local residents in the areas it passes through without ever stopping, it does have some knock-on benefits for Chilterns residents. Simmons conscientiously and fairmindedly includes a pro-HS2 argument from a commuters-rights activist, who says that it will relieve some of the passenger pressure on the severely overtaxed normal-speed, frequent-stop trains on the existing rail system. But is that really worth the ugliness of the eye-sore imposed on the landscape, the  disruption caused by the building work (including the dumping of huge volumes of displaced soil in farmland acquired through compulsory purchase, the new roads for heavy vehicle access that have obliterated ancient lanes, etc), or the ongoing noise pollution of high-speed trains rattling past every nine minutes once the monstrosity is completed? Then there are the environmental costs: high-speed trains hurtling along the elevated railway are a death trap for barn owls and bats, and the construction creates a barrier for the free movement of wildlife and plants across the terrain.

Stop press: The Country of Larks has been shortlisted for Debut Travel Writer of the Year in this year's Edward Stanford Travel Writing Awards.