"and dip my brain in joy"

I doubt that there's been a month passed since I first heard that song in 1979, that I haven't at least once broken out spontaneously into the chorus.... 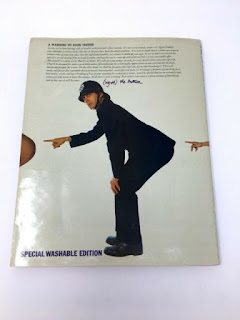 Being a Python fiend (starting in my pre-teens, mind blown by the repeats of the original series, initially grabbed by the Gilliam cut-out animations) I devoured the books, the records, the films .... and I also followed the squad's every last tangent...  Bert Fegg's Nasty Book for Boys and Girls, Ripping Yarns... and Rutland Weekend Television, Eric Idle's spin-off. Which must be where I first encountered Innes. Although he was also memorably a minstrel in Monty Python and the Holy Grail and is sometimes described as "the seventh Python".

Both Rutland Weekend Television and Neil's own show The Innes Book of Records were variable affairs - which we fiends watched hopefully for flickers of the full Monty madness.  Book of Records was a bit too mild and droll, its parody targets rather easy and obvious. 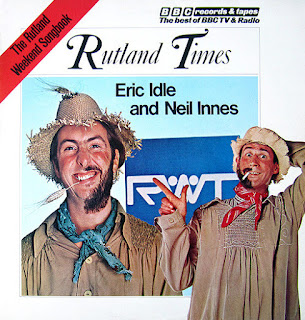 Still there was a rock parodic bent that pulsed promisingly in both series...


... and that would culminate in Innes's towering achievement:

Which I had the opportunity to write about a few years ago as part of a Pitchfork piece I did on  the history of pop parody:

Running a very close second to This Is Spinal Tap for the prize of all-time funniest movie-length music parody, All You Need Is Cash started as the spin-off of a spin-off. After Monty Python's Flying Circus, Eric Idle  made the not-quite-as-hilarious British series Rutland Weekend Television (the name -  a play on the commercial-television regional franchise London Weekend Television - comes from the smallest county in England, Rutland, which is only 18 miles by 17 miles), for which ex-Bonzo Neil Innes contributed musical sketches. One of these was The Rutles’s “I Must Be In Love,” filmed in the black-and-white caper style of A Hard Day’s Night.  Something was in the mid-Seventies air: Fab Four nostalgia erupted with the Broadway smash musical Beatlemania and the all-star calamity Sgt. Pepper's Lonely Hearts Club Band. When Idle hosted Saturday Night Live for a period, he dug out the “I Must Be In Love” clip;  the huge viewer response persuaded Lorne Michaels to finance a prime-time NBC special. Most likely the very first rock mockumentary,  All You Need Is Cash tells the story of  the Pre-Fab Four -  Dirk, Nasty, Stig and Barry -  and their manager Leggy Mountbatten (who hated their music but liked their tight trousers, which “left nothing to the imagination”).  Embarking on the project, Innes decided not to listen to the original records but rely on his memories, expertly simulating the guitar tones, chordings, and vocal traits of the Beatles at every stage of their career. He also formed a proper group to play the songs so that there was a real “vibe” to the music. All You Need Is Cash works simultaneously as a wistful wallow in nostalgia, a satire of Sixties folly, and a enjoyable showcase of sheer musical craftsmanship. In addition to roles for SNL cast regulars like Ackroyd, Murray, and Belushi, there weres delicious cameos for real-world rockers like Mick Jagger (“we were the South’s answer to the Rutles”) and Paul Simon.   Out of many wonderful scenes, perhaps the best is the New Orleans sequence: the documentary maker goes in search of the black ‘n’ bluesy roots of the British Invasion Sound, only for Blind Lemon Pie to tell him that he learned everything from the Rutles.  The ex-Beatles loved it, especially George Harrison, who said that "the Rutles sort of liberated me from the Beatles in a way. It was the only one I saw of those Beatles television shows...  It was actually the best, funniest and most scathing. But at the same time, it was done with the most love."

Earlier in the Pitchfork Parody piece, I also wrote about Innes's first brush with renown as the music-man in The Bonzo Dog Doo-Dah Band:

Although Spike Jones and his City Slickers took the mickey out of American pop culture of the 1940s and ‘50s with the Musical Depreciation Revue, the first rock-era outfit wholly dedicated to parody was The Bonzo Dog Doo-Dah Band. Centered around singer/trumpeter Vivian Stanshall and singer/music-man Neil Innes, the Bonzos came out of the same Anglo-Surrealist comedy sensibility that produced Monty Python; indeed they were resident band on Do Not Adjust Your Set, a kids TV show that involved future Pythons Eric Idle, Michael Palin and Terry Jones.  As with Python, their absurdist nonsense was a cathartic protest against the repressions of English middle-class life.  Stanshall talked disparagingly about “Normals”, suburban drones trapped in inane routine: it’s they who were the “really dreadful freaks”, not bohemian eccentrics like himself.  Parody, then, was for the Bonzos the aesthetic counterpart to their rejection of common sense reality. Probably their most famous skit is “The Intro and the Outro,” a smarmy-voiced “introducing the band” routine with each player allowed a brief flourish in the spotlight: the patter rapidly extends beyond the actual group to public and historical figures like Charles De Gaulle (on Gallic accordion, of course) and Adolf Hitler (“looking very relaxed... on vibes... nice”).


Elsewhere in the Bonzo discography, there’s a spoof on Elvis in country ballad mode (“Canyons of Your Mind”), a merciless skewering of late Sixties minstrelsy (“Can Blue Men Sing the Whites”), a Wilson Pickett take-off (“Trouser Press”), and a teen-pop parody that tells the unsavory truth about adolescence (“King of Scurf”). But the Bonzos don’t spare the freaks, either -  even though they were considered counter-culture fellow-travelers -  sending  up psychedelia on “We Are Normal”.  As with so many parodists, the Bonzos’s secret shame – or at least fatal weakness – is their deep attachment to the clichés and conventions they mock: they poke and pick away at them, but never quite transcend.


In the waning days of buying used vinyl, several years ago I picked up an LP by a group I'd never heard of before (always love it, or used to love it, when that happens). Like the rest of that twilight trawl, the record languishes unplayed to this day: 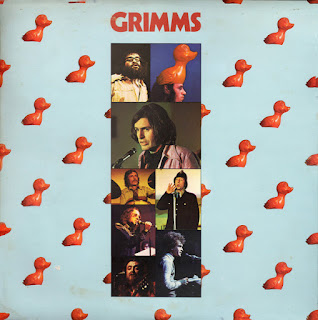 I picked it up because it was on Island and Neil Innes was in the band - a sort of
comedy/rock-interface supergroup incorporating members of The Scaffold, the Bonzos, and The Liverpool Scene. GRIMMS is an acronym of the founding members's surnames

As well as the poets and parodists, some serious proggers and folk-rockers played with the band, either joining permanently or  guesting for concerts. Members of King Crimson and Plainsong, Timebox  and Steeleye Span, Colosseum and Patto. 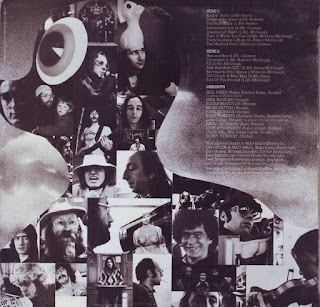 There is something to be written about the intertwining of rock and comedy in Britain - parallel currents of the liberation energy that broke through in the first couple of decades post-War, streams of irreverence and insubordination that criss-crossed and converged at many points *. 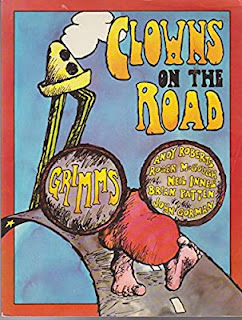 Python's records were on Charisma, who later had Viv Stanshall ... Island, and then Virgin, did the Derek & Clive records by Peter Cook and Dudley Moore... Ivor Cutler, earlier in the Magical Mystery Tour film, was on Virgin and Harvest...  Billy Connolly had been in a folk group...

And as this clip below reveals, like so many 1960s and 1970s British rockers, Innes was a product of art school - Goldsmiths, in fact - and the other Bonzos were art students too. 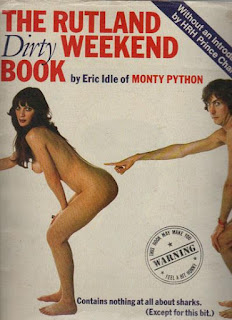 * which is not to deny that both liberation-currents were ultimately contained within their own middle-classness, maleness, English eccentricity, etc...  they pushed the limits, but only so far


the proto-Python show Do Not Adjust Your Set, on which Bonzo Dog Doo-Dah band were a fixture

an appearance on Blue Peter