lotta love for Steve, Andy, Mick and Brian closetted away out there!

from the bulging mail bag:

Tiit Kusnets suggests Ian Gillan.
(I dunno, Deep Purple. They were so big once,weren't they... at my school there were almost as many Purple logos scrawled on desks as Floyd ones... but they seem to have aged so much worse than Zep or Sabbath, definitely a distant third to those titans... when you put Ritchie Blackmore up against Page and Iommi... even the album cover art is so drab and lame by comparison with Zep/Sabs.... well "Smoke On the Water" is undeniable I spose... So Gillan: hard to say, given the material he was working with. I'd pick the bloke in Budgie first to be honest.)

Steve Schuldt says it has to be Jagger.
(Well I'd kind of discounted anybody whose name screams out Nineteen-Sixties, but yeah Sticky Fingers, Exile, a few bits and bobs as the decade limps on... "Hard rock" doesn't seem quite the right word though for the Stones, in the same way that as Chuck Eddy wrote in Stairway to Hell's intro he could never have included them in under "metal", even with how elastic his definition of that word is ... They are just a genre of their own, the Stones)

Lemmy Kilminster/Brian ex-Geordie in AC/DC: nah, too painful (in the sense that you can almost feel the nodes forming on their vocal cords) 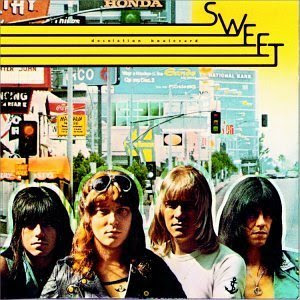 Simon Sellars says I need to get the original singles for their B-sides, while Joe Stannard recommends Sweet Fanny Adams as "their hardest, heaviest album... It rocks like Iron Maiden with a serious chip on the shoulder replacing the cack sword 'n' sorcery fantasies".

And yet something in me resists going down this path, chasing down the albums*... I fear it would (c)auteurise the pure enjoyment out of it for me.... I'm not sure I want to go into that zone that Popular can get into where it's all a bit studium-encrusted... you start clocking who was the studio engineer on track X and so forth, the arranger, that kinda brain-encumbering lumber of data that doesn't really have anything to do with Sensation or Truth.. I'm almost happier just sticking with the Greatest Hits CD. (I actually have Desolation Boulevard, on vinyl--had it for years, but only listened to it once). The idea of scurrying around scooting up every last speck of pleasure...

I feel the same about ABBA, I think... as much as I love what Carl's written and bow down to the majesty of Taylor Parkes's deservedly legendary Visitors piece in Unknown Pleasures (someone should just scan it and wack it up there on the web... I will if no one else does) ... or enjoy reading the case made for particular UK #1 singles of theirs at Popular... I feel a strong impulse to keep them in a securely cordoned-off reservation of (relatively) unreflective rapture, a theory-free zone ... perhaps that seems odd (all things considered!) but there it is... it's not that they're not worthy of that kind of Bazin-level signature-scrutiny, not at all - just that i can't see any personal advantage, or enjoyment-enhancement, in going down that route myself

and actually it's exactly the same as with the Sweet: I've got the ABBA greatest hits CD, which gets an airing quite regularly... and then this vinyl copy of The Visitors (picked up for only a dollar a few years back).. which is still in its shrink wrap... I just can't see myself trawling through the oeuvre album by album

* oh who am i kidding, i'm going to be stopping and looking under 'S' every time i go in a used record store until i get my mitts on the bloody things... just wish it was me who'd bought the 7 inches back in the mid-80s when they were dirt-cheap and the Monitor crew was going through its glam'n'glitter obsession (Paul Oldfield was the one who bought them i think, and Hello's "Another School Day", another Tasmin anthem), whereas nowadays, thanks to bleedin' Bob Stanley and his "junkshop glam" concoction they're collectable and doubtless go for a pretty penny...
Posted by SIMON REYNOLDS at 9:01 PM
Newer Post Older Post Home