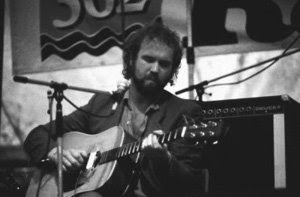 RIPs appear here quite regularly. Rock is long in the tooth; musicians you admire, whose music you've grown up with, seem to be popping their clogs with mounting frequency. Usually I feel sad for a bit, in a fairly removed sort of way... then life's petty urgencies resume. But this week's big one, I must admit, has hit me quite hard. It's cast a shadow over the last few days. It feels a lot more personal somehow.

It struck me that I might possibly have listened to John Martyn more than any but a handful of other musicians. Actually I can't think of who else I'd have listened to more, over such a sustained period. The Smiths? Love? But if you broke it down, it would be Solid Air and One World that accounted for 95 percent of that lifetime of Martyn listening. Those two albums have been such a large and constant presence. They keep coming back, or rather, they don't go away, whereas there's other central artists, deep deep favourites, where there are long periods of mutual leave-taking (Can, for instance--I seem to be taking a breather from them, for some reason just don't feel the urge, but I know the time will come again.) (Another example: postpunk, which dipped away for much of the Eighties and almost all of the Nineties). But John Martyn… it barely took me a minute to settle on Solid Air as my desert island disc when asked to contribute to Marooned. It was my first choice, and then to do it proper I thought up some other candidates (closest contender being Rock Bottom). But it was always going to be Solid Air, partly because the "desert island" scenario suggested it somehow, but also because of its inexhaustibility as a record.

Strangely, though, when I think of John Martyn's music, I don't think of personal memories particularly. Some records evoke times of your life: Head Over Heels and Sunburst and Snowblind, the debut Smiths album, those records remind me with incredible vividness of a student bedsit in north Oxford, the yearnings and miseries of that time; "Thieves Like Us" carries with it the flush of romance remembered; there's plenty more examples. But with most music, the memories carried are memories of the music itself, if that makes sense. When you're a music fiend, that function of commemoration or life-soundtracking or "our song" that perhaps remains prominent for the more casual listener, it really fades away. You might say that music's life eclipses your own, or it becomes one with it, or it fills in the holes. Music doesn't serve as a mirror for narcissistic identification so much as a means of leaving one's self behind. A favourite record, then, might be more like gazing at a landscape, the kind of place you'd revisit at different stages of your life. A perennial source of wonder. (This is why I'm not a huge fan of memoiristic criticism: oh, it can be done well, but even at its best it doesn't really tell you anything about the music; that one individual's memories adhere to a piece of music in a particular fashion doesn't have any relation to what I or anybody else might get out of the record or glom onto it, experientially. Although it's also true that the narcissistic projection towards a song/album/group that music arouses so potently can make it feel like those life-experiences somehow inhere to the music).

But back to John Martyn--another strange thing is that I'd never gone to see him perform live. This despite being a fan since 1985 (when I'd taped Solid Air off David Stubbs--cheers David!--having been intrigued by this Barney Hoskyns interview with Martyn that compared Solid Air to Astral Weeks--cheers Barney!). The opportunity just never presented itself , and I'd never felt tempted to seek it out. I guess the sense you got was that after the 1970s heyday Martyn onstage was likely to be... variable. He'd be playing with bands composed of younger musicians, a modern soft-rock/AOR-ish sound like on those post-Grace and Danger Eighties albums, you heard tell of the keyboard sound being thin and digital-synth nasty. It seemed to promise disappointment. Anyway, I've always been more of a records man; I just don't have that compulsion to witness everybody whose music I love perform live at least once.

But late last year I heard that John Martyn was playing in New York. (I have to thank Rob Tannenbaum for the tip off, I'd have completely missed it otherwise--cheers Rob!). October the 9th, at Joe's Pub--less than ten minutes away. And not only playing in New York, virtually round the corner, but playing with Danny Thompson. So I had to go, even though this was the night before we flew off to London for the annual see-the-folks-and-friends vacation, there was packing to be done that night, an early rise the next day.

I got there and found quite a long line to get in, which surprised me, as I'd always had the impression Martyn wasn't really known in this country. And nor was it the case that the line was entirely composed of British expats. I ran into a friend-of-a-friend, an experimental musician (of the academic kind) who I'd not have particularly expected to be a John Martyn fan. We positioned ourselves near the bar with good sight-lines of the stage.

Joe's Pub is not a pub at all, but a sort of nightclub/performance space attached to The Public Theater on Lafayette. It's the sort of place where you'd expect, oh, Norah Jones to play; it's got a bit of an acid jazz/downtempo/Giant Steps type vibe to it. The last thing I saw there was ages ago: Herbert and Dani Siciliano doing the full chanteusy-meets-clickhouse thing. Anyway, there was this small, scarlet curtain at the back of the stage, which just seemed like part of Joe's plush cabaret-ish décor. All of a sudden there's a ruffling with the curtain, the suggestion of struggle and kerfuffle behind it, almost a Tommy Cooper/Morecambe & Wise-esque effect. And then, with evident difficulty Big John and his wheelchair were maneuvered through the red fabric and onto the tiny stage. I might be misremembering it but I think they actually had to wheel him on backwards. At any rate, it wasn't a dignified entrance.

First impression was of a ruin of a man. Magnificent, maybe, but definitely a ruin. In fact what I couldn't help thinking of was the sketch in Monty Python's The Meaning of Life ... the monstrously obese diner who eats so much he explodes. Martyn's face had this sagging quality, it seemed to droop and merge into the sprawl of his torso.

They opened, I think, with "Big Muff". It was great, totally different from the One World recording naturally (no drummer, just John and Danny), loose and swinging. I can't remember the exact sequence of songs, but at some point early in the set, they did "Sweet Little Mystery", Martyn's voice this immense blubbery ache of sound, a beached whale of bluesiness, bedraggled and beseeching. But apart from "Mystery" from Grace and Danger and "Muff" from One World, everything else was from Solid Air: "Jelly Roll Blues", "May You Never" (which got a cheer), the shatteringly tender imploring of "Don't Want To Know", "Solid Air" itself, maybe another one or two I'm forgetting. It was almost a Don't Look Back, except the order was scrambled and they didn't do "Go Down Easy", to my chagrin. The friend-of-a-friend pointed out how different the guitar tunings on each song were from the recorded versions.

Indeed between the songs there was some tuning-tweaking going on. There was also banter. But Martyn's speaking voice was so slurred, plus he was sat slightly far back from the mic (fine for singing but not for stage patter) that it was all completely indecipherable. He told jokes but through his bleary, sodden mumble they became abstract jokes. You could pick up the cadence and the timing of joke-as-pure-form, almost to the point of getting the comedic pay-off when the punchline came. But the actual content was lost. I picked up one or two lines: one involved a man going into a bar, another one was about penguins. I think he might also have cracked his post-amputation standard about having promised the promoter not to get legless, boom boom.

But I did manage to catch it clear when he apologized for the set being below par--"that's just the way it goes sometimes". At which Danny Thompson leaned over and gave him a kiss on the top of his balding head, affectionate yet reverent. I also just about made out what Martyn said before they launched into what turned out to be the final song: something like "this is by a gentleman called Skip James, who doesn't deserve to have his song murdered." It was "I'd Rather Be the Devil" of course and it made me wonder what other examples there are of a great artist--a writer and performer of brilliant original material--whose absolute greatest recording and signature song in live performance is a cover of someone else's song. (From the rock era obviously; there's loads of examples from the era when singers did standards, didn't write their own songs, etc). Of course to call it a "cover" is to underplay the amount of reinvention imposed on the original (which must be why John changed the title from "Devil Got My Woman", a bit of justified arrogance there: took your song, made it my song, whatchu gauna dee aboot it, eh?). So "Devil", live at Joe's Pub: not as torrential and tectonic as Live At Leeds, not quite the exquisitely wrought aquamiasma of Solid Air. But I wasn't disappointed. Oh no. Stole my breath away it did.

And then they were off, John wheeled backwards through the red curtain with the same awkward strenuosity it had taken to get him onstage in the first place (apparently he'd reached 20 stone in his last year). Semi-apologising for the brevity of the set as they shuffled off, Danny Thompson explained that the gig was kind of impromptu: John was coming to New York to visit a hospital to get a new prosthesis fitted, and they thought "why not?".

So, my first and only John Martyn Live Experience. I walked home aglow, much earlier than I'd expected (just as well with the flight) but not dissatisfied, not in the least. I meant to blog it after we got back from London but the moment passed. Now the man has passed and the moment seems right.

There's no footage online I can find of the gig (an older crowd, not down with youtubing every show they go to?) but here is Jon Pareles's review of the performance. 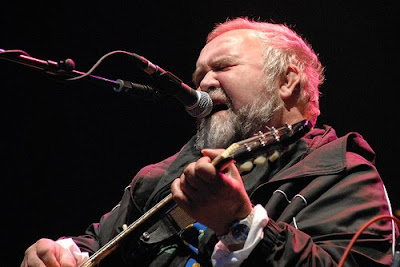