Double crikey, here's a film actually made by Scritti Politti for the BBC program Grapevine,  explaining how to make your own record. Featuring members of The Door and the Window, Desperate Bicycles, and lesser known DIY outfits of the era, as well as Sue Scott from Rough Trade, record engineer and mastering maestro George Peckham of "Porky Prime Cuts" renown. And various Scrits, including a rare sighting of fourth member / organiser Matthew Kay.

Seemingly the "promo" for "P.A.s" in the previous post was made from out-takes from this production. So filmed in 1979, but apparently broadcast in 1980.

There's tantalising references to the guide-to-DIY booklet How To Make A Record that Scritti published and circulated, which the Grapevine presenter invites viewers to write in for. Has anyone got a copy of that?

Found pages from How To Make A Record at this tumblr stillunusual.  It even had a catalogue number - SCRIT 3. 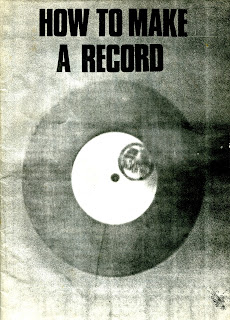 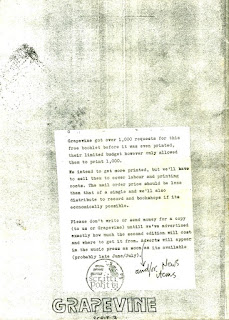 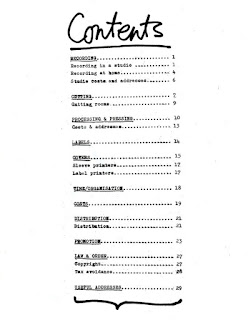 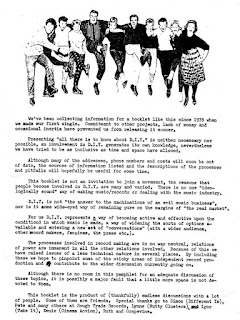 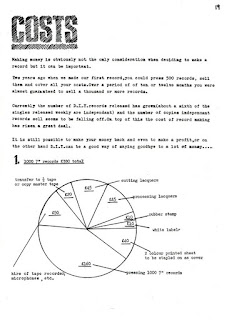 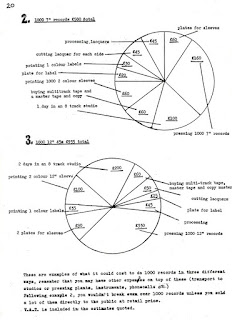 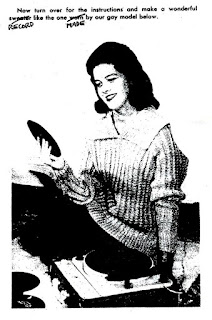 Posted by SIMON REYNOLDS at 11:46 AM
Labels: DESPERATE BICYCLES, DIY, GRAPEVINE, HOW TO MAKE A RECORD, POSTPUNK, ROUGH TRADE, SCRITTI POLITTI, THE DOOR AND THE WINDOW

Crikey, look at this - a time capsule of 1979. And a sort of "pop promo", albeit never shown anywhere until now, for "P.A.s" - my favorite tune on 4 A Sides - using a 'single edit' shorter version of the song.

(Tip off from the ever-alert Jon Dale)

A proper good glimpse of the Carol St squat squalor - including a kitchen area that looks manky and mingin.

Means-of-production demystified with scenes of the recording sessions, record pressing, and record packaging (although it looks like they are sleeving the Peel Sessions EP, as opposed to 4 A Sides, which would be the perfectly circular and self-reflexive thing to do. But then in the record store, the young lad flicks 'n' picks a copy of 4 A Sides. Confusing!)

Although the record by itself abundantly demonstrates this, the glimpse of  the three playing together reinforces the sense that Scritti had gone way beyond messthetics by this point - that is some tight white funk.

I wonder if the mysterious Denis Cullum, who posted this on YouTube, but nothing else as yet,  has even more footage of the era up his sleeve.

Said to be the melody source for "Hegemony." 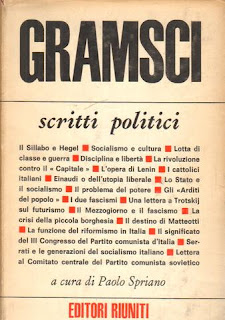 If so, derived most likely from this 1979 release featuring Green's hero Martin Carthy.

Here's my review for 4Columns of Robert Macfarlane's new book Underland: A Deep Time Journey - in which the renowned landscape and nature writer ventures below the surface in search of a new sublime - experiences so intensely alien they defeat his own eloquence.

I was really saddened to hear about the recent death of Andy Gill, who wrote superbly about postpunk, electropop and weirdo music of all sorts for NME during the postpunk era, and later became resident popular music critic at The Independent.  It was for Q, though, that he came to New York in 1993 to interview Donald Fagen, whom as it happened I was covering for The Observer. We met at the album playback for Kamakiriad and had a long and very pleasant conversation.

Sadly we never met again, but in 2003 I did interview Andy by telephone for Rip It Up and Start Again about his time as the Sheffield correspondent for the New Musical Express.  Here is a tidied-up transcript of our conversation, with Andy providing a richly detailed lowdown on Sheffield subculture. He talked about the early days of Cabaret Voltaire, Human League, Vice Versa / ABC, as well as a number of lesser-knowns and curios from the after-punk era (including I'm So Hollow, Artery, Molodoy, The Extras, 2.3). I also asked Andy about his experiences working at the NME - heady, boozy, conflictual - during its last golden age. 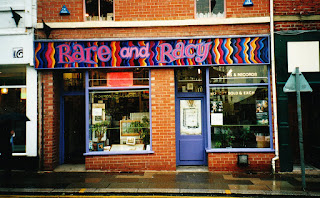 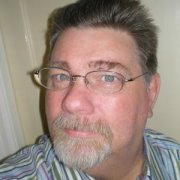 A tasty and unusual mix from Moon Wiring Club

But draped also with lots and lots of the vintage telly-derived voice-snippets that you expect and love from MWC.
Posted by SIMON REYNOLDS at 9:12 AM
Labels: IAN HODGSON, ILLBIENT, MIXES, MOON WIRING CLUB

Typical really - you declare your intention to revive the long-lapsed custom of inter-blog conviviality. Only to (almost) immediately lapse back again into unlinking entropy.

Here goes with another effort. Starting with an interesting piece on the pop hologram phenom by Owen Myers at The Guardian. Featuring a few quotes from me about the exploitation of dead stars. Here also is the full batch of thoughts I sent Owen a week or two ago.

Also quoted in the pop hologram piece is Professor Robin James, who's been on a little tear of posts recently at It's Her Factory. Here's an analysis of Panic! At The Disco's "High Hopes" (oh how I loathe that song) in terms of the financial logic of the derivative, and a related post about Panic! singer Brendon Urine's team-up with Taylor Swift for the even more putridly self-empowered "ME!" and its promo atrocity. (And to think I once hailed "I Write Sins Not Tragedies" as the "Party Fears Two" of emo). Robin also identifies a mini-trend for "Brexit Techno."

Carl the Impostume with a short sweet paean to the Cocteaus and Felt's Liz-powered "Primitive Painters".  I never got on with Treasure myself - too frou frou and frilly -but loved the Cocteaus on either side of that. Like Carl, I feel that, with Felt, "Primitive Painters" is the One - a pearly peal of  heroic inadequacy from the howling heart of those Years of Exile - although there are a few other high moments in the discography, amid much over-exquisite filigree. (How right somehow that the primary instrumentalist in the group should be called Maurice - not your run-of-the-mill British rock name).  Seems to be something Lawrentian in the air, what with this appreciation (Quinn Moreland on Forever Breathes the Lonely Word) that appeared only days ago in Pitchfork....

"When the Owls Cry in the Night" is the peculiar Belbury Poly-ish title  - never actually unpacked or even referenced during the piece itself, as I recall - of an interesting column by Rob Horning that recounts listening strategies he's developed in order to make music compelling in the face of the curiosity-killing overload.  Tasks he sets himself to reenchant, or renarrativize, the vast accumulated past (a past that nonetheless seems way more alluring than the vast sprawling present). Always enjoyed Horning's meditations at The New Inquiry on the effects of social media, the internet, smartphones, etc etc on life, culture, mentality, mood, etc etc. Now he and some of the same Inquiring minds  seem to be doing similar sort of  now-analysis at a new-ish location:  Real Life.


The idea of rationing one's exposure to music, keeping a distance from it, as a passion-protection strategy actually comes up over 35 years ago in this ancient radio interview with Sounds's Dave McCullough - a lost legend of the punk / postpunk / postpostpunk music press. He appears to have disappeared - nobody from that era seems to know for sure where he went after London or what he went on to do after quitting the rock press, most likely in a state of  savage disillusion. I have written on one of my  less-frequented blogs about how beguiling I find this unexpected discovery, this seemingly sole document of  McCullough in the audio flesh. 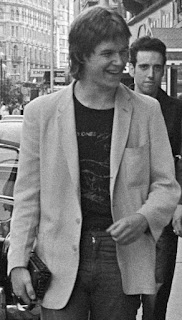 McCullough in the photo flesh, strolling through Leicester Sq with the Clash

Must have listened to the show about four times now, entranced by his spiky yet silver-tongued patter, by the brittle and impetuous movements of his mind, by the texture of a different age - 1983. Even grown fond of McCullough's odd and motley selection of favorite records from his collection, which include Hall & Oates, Dory Previn, and contemporaneous releases by the Pastels, Microdisney, Hurrah, Peter Hammill.

One thing McCullough said that struck me as true is that reviewers  - at least those with keen instincts and sharp sensibility - can tell by the first playing of the first track whether an album is any good or not. Which reminds me that I still haven't listened to Vampire Weekend's Father of the Bride all the way through - and that's because the memory of the first few tracks as heard several weeks back left an indelibly unappetizing after-aroma. This review by Lucas Fagen at Hyperallergic has the ring of truth: earnest maturity and emotional "depth" has turned to stodge all that was spring-heeled sprightly sparkly in Vampire's blithe and ravishingly superficial soundspirit. But it could be that I "agree" in large part because that gives me permission to shirk the chore of listening to all four sides of it. 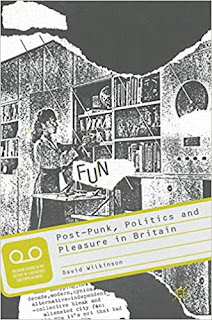 Talking of the postpunk era, here's an interview with David Wilkinson, the author of Post-Punk, Politics and Pleasure in Britain. Which I confess - scared off by the academic publisher price - I have not actually read, but I've seen Wilkinson give a conference talk and he has a lot of interesting stuff to say about the era. 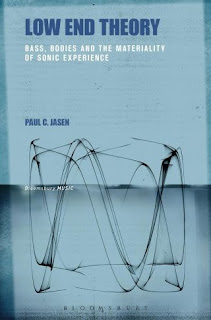 Another book of note published relatively recently is Low End Theory: Bass, Bodies and the Materiality of Sonic Experience by Paul C. Jasen, who some in this parish will remember as the man behind this . With subsections bearing titles like "Spectral Catalysis", "Numinous Strategies", "Baroque Affect Engineering" and "Three Physio-Logics", it's some heady stuff ranging far beyond obvious compatibles like roots reggae and jungle and dubstep. More information and favorable appraisals can be checked out here. 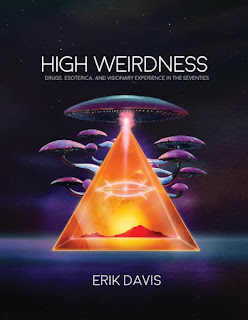 Also notable are two books just out or imminent from old pals of mine, Erik "Techgnosis" Davis with High Weirdness: Drugs, Esoterica, and Visionary Experience in the Seventies (US release info here, UK release info here) and the legendary Vivien Goldman with Revenge of the She-Punks
A Feminist Music History from Poly Styrene to Pussy Riot. 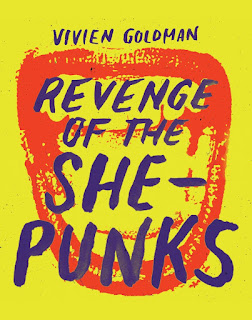 Oh yes and I'm looking forward to reading the new book by Richard King,  The Lark Ascending: The Music of the British Landscape - which looks to be the holloway connecting the two Robs (Young's Electric Eden, Macfarlane's  Landmarks). 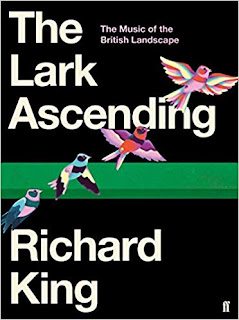