Halloween entertainment for the mind, ears and eyes from Repeater Books 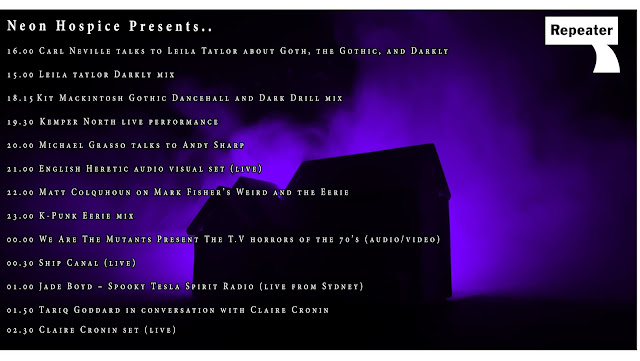 Here's a piece I did for Tidal on the early days of U2, when they were just another New Wave band jostling for attention, timed for the 40th anniversary of Boy.

I could have sworn the first time I saw / heard U2 was them playing "A Day Without Me" on TV, but deduction led me to this performance  of "I Will Follow" on the after-school kids show Get It Together.

Stop press: History Is Made At Night finds a 1980 TV performance of "A Day Without Me" that must be the one I remember - on the youth TV program White Light, presented by Gary Crowley
The promo - with video FX mirroring the delay on the guitar
Back when the singer went as Bono Vox
Deluges of grandeur.

Here's my 4Columns review of the Super Deluxe Edition of Sign O' The Times and ever-so-slightly ambivalent paean to the uncontrollable copiousness of Prince.

Listening to the Super Deluxe Sign in a single sitting did remind me of the episode of Louie where now-disgraced Louis C.K. and an equally greedy comedian buddy do a “Bang Bang”: eat two slap-up meals in quick succession at different restaurants. As gross and health-endangering as this was, at least the sad-sack duo gorged on different cuisines.  Listening to the new supersized Sign all the way through is like eating at the best Italian restaurant in town (the original Sign, which takes up the first two discs) and then immediately repairing to a mediocre Italian restaurant for rounds two, three, four…  Not only has the edge been taken off your appetite, but you have the fresh memory of something superior and delicious with which to compare.

Too-muchness is Prince's essence. He seemed afflicted with a sort of erotomania of sound. Just couldn't stop playing - with himself (literally, in the studio - playing nearly all the instruments, multitracking his own voice), with others.  The compulsive, almost involuntary creativity caused him to record while on tour, both before the concert using a mobile studio  truck or after the gig at a local studio.

Where did he get the energy from? Especially as these concerts were bloody long. In August 1988, I saw Prince twice in a single night: first at Wembley Arena, where he and his band blazed through 41 songs over the course of a couple of hours (there were three sets of encores!), and then again at a smaller venue a couple of hours later, where the Purple One’s idea of post-show relaxation was to play another lengthy concert to a more intimate  audience.  Don’t stop ‘till you get enough, as Michael Jackson -  the only Black American artist of the Eighties to eclipse Prince in popular impact – put it. But also "enough" is as a good as a feast, as the old maxim goes –once you’re replete, even the sight of a banquet brings on nausea.

Talking of maxims... Prince's music turns around the contrast of maximalism and minimalism. Across whole albums, but also within individual tracks sometimes.

I always dug the maximalist tendencies, and certainly "approved" of the excess, then and now. Harped on about it at a time (late Eighties) when me and my Melody Make crew were calling for an unpunking of the discourse...  when we were rejecting the truism "less is more" and proposing that more might actually be MORE. (The sheer obesity of the Buttholes sound -  spare tyres of sound flopping free from the girdle of postpunk inhibition and restraint)

But in practice the minimal Prince holds me more as a listener.

The nubile perfection of Dirty Mind, a sound that is barely there (those translucent keyboards), all suggestion and implication. His only truly flawless statement, as an album?

"Kiss", worn out by over-exposure, but so fleet and fresh to hear after the baroque folly Around the World In A Day

(Although the sublime loping simplicity of "Pop Life" ...)

And on Sign itself, the tracks that are faraway my faves are the most mechanistic and monolithic  - "Hot Thing", "It."

And "If I Was Your Girlfriend"

"I Could Never Take The Place of Your Man" is a particularly striking example of the minimal / maximal tension.

The first half is this perfect pearl of power pop.

But then it goes off into a completely different direction / aesthetic universe, that barely seems connected to the first part - more to do with Santana than the Bangles. And which I like even more...

The bluesy funk of "Sign O' The Times" the title track / lead single reminds me a tiny bit of the biting blues-funk and bitter “hard times” lyrics of Johnny Guitar Watson songs like “Ain’t That A Bitch” and "A Real Mutha For Ya" -  updated with a late Eighties drum machine feel.

This is my favorite thing on the Supersize Deluxe and it turns very much around the minimal-maximal contrast - stark, almost Mantronix like drum machine versus florid multi-tracked vocals

At one minute long, more a splinter than a song, “Colors” is an exquisite fragment of jazzed guitar chords that could be off an ECM album by Bill Frisell or John Abercrombie.

There isn’t a neat parallel with other art forms, because pop albums rarely have a narrative structure, but let’s imagine the ‘super deluxe edition" template applied to film. You might dream of seeing the original director’s edit of Orson Welles’s The Magnificent Ambersons before the studio butchered it (and lost forever the offcuts). But sensibly you might flinch at a 9-hour version of Citizen Kane.

In this case, Sign doesn’t restore what Prince originally intended, it’s more like a series of extensions to a house that partially obscure the original construction without actually rebuilding it. The pristine thing is still in there but there’s all this stuff in the way now.

In one sense, the Deluxe Edition is beautifully curated – the sound is fabulous, the packaging exquisite, right down to the peace symbol stencil on the cardboard box that arrives at your front door. Yet in another sense, it’s a feat of anti-curation that overrides the original curation of the artist (and the record company, who held in check Prince's own more-IS-more impulses).

In some ways, it would have been more intriguing to reconstruct the original planned but abandoned albums – Dream Factory, Camille and Crystal Ball – that preceded Sign and supplied much of its originally released content.  Like all those music nerd bloggers out there who create counterfactual albums - sometimes records that were planned and put on the schedule but withdrawn, or that were started but abandoned, and in other cases, were never conceived by the artist but fit alternate-history timelines (Beatles albums if they didn't split in 1970 but pooled songs from what in our world went into the solo albums).