Very sad to hear about the way too young death of Joe Cassidy of Butterfly Child -  purveyors of gorgeous dreampop from Northern Ireland.

I made both the EPs singles of the week in Melody Maker (see below) and around that time spoke with Joe and Gary for a label profile of H.ark!.

Another Butterfly Child EP, Eucalyptus, followed on H.ark!, and then they recorded an album each for a succession of labels: Rough Trade (Onomatopeia), Dedicated (The Honeymoon Suite), and HitIt! Recordings (Soft Explosives).

Here's an interview with Joe around his 2015 album Futures done by The Thin Air.

And here is a link to the bandcamp for the 2020 album Our Life in the Desert by My Bus - a joint project by Joe and Gary McKendry. There, you can read a nice detailed account of the pair's journey through music:

"The emotion comes from a friendship lost, renewed and remembered, or as Joe puts it, 'a love story. One between two friends, the music they share, ex-girlfriends, pals who are no longer with us and the ghosts of old haunts long gone. It is a longing for a Belfast and a time that never really existed.'”

And here's a nice remembrance of Joe from Ned Raggett.

And a tribute from Stuart Bailie at the Belfast Telegraph.

A busy week for  Kieran Press-Reynolds.

He makes his Pitchfork debut with a review of NYC rap crew Surf Gang's latest album SGV1, described as "a mansion of sweet beats and vocal textures... husky whispers, slow-motion chirrups, reverb-laden echoes that flutter into nothingness" and with ensemble rapping that "feels like you’re watching the SoundCloud rap Avengers unite or some crossover episode between two hit TV shows".

He also makes his Bandcamp debut with a profile of the netlabel dismiss yourself - the "nexus of hex" plus other freaky online microgenres, whose catalogue offers a trove of "glitchy burps", "alien jeers", "videogame ambient," "meme-havoc" and assorted bitcrushed beauty.

And he's further been busy working at Insider, where he's done some fun pieces like this profile of  Vanessa Clark a.k.a. @glitchgirlmaster, the creator of TikTok's dance-craze of the summer.

painted into a corner

Recently I read Janet Malcolm's famous New Yorker piece "A Girl of the Zeitgeist" - after her death, someone had tweeted a scan of the first two pages, which misled me into thinking it was a profile of the art critic Rosalind Krauss (a figure who radiates intellectual glamour - albeit not quite enough to get me to read the two books I've bought of hers, as of yet).

Of course it's not about Krauss, it's a profile of Artforum editor Ingrid Sischy and a trek through the microworld of artists, curators, dealers and critics in 1980s New York.  It's incredibly sharply observed and acerbic stuff.

One thing that struck me is how that whole milieu with its factions, feuds, spats and schisms resembled another microworld - you guessed it, music criticism. Not in the details or the ideological stakes, and certainly not in the status and money involved, but there seemed to be correspondences in terms of the rhetorical intensities, the investments, the stances struck, the personality types, the bitchiness.

I was particularly taken by a section where Malcolm talks with Carter Ratcliff, who wrote for Artforum and Art in America, and the conversation turns to the flamboyant critic Rene Ricard, whose approach was so different from Ratcliff's cool, dispassionate, historically well-informed way of going about things. (The reference to deAk is to another Artforum critic, Edit deAk, renowned for her fractured and elliptical style). 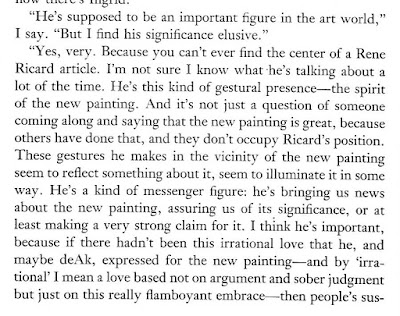 Reading that passage, it occurred to me that the Ricard approach - what Ratcliff elsewhere describes as a "sort of ecstatic, fanlike involvement... with one thing or another from moment to moment", and which was marginal within the world of art criticism -  occupied a much larger and more central place in  Anglosphere music writing -  and particularly in the U.K.  Such that the Ratcliff mode (deep historical knowledge, understanding of the craft side of making artworks, etc) was the more unusual occurrence, represented within British rock writing by figures like Ian MacDonald and a few others.
"These gestures he makes in the vicinity of the new painting" seems like something that could be said of a certain breed and lineage of rock writer prone to an oracular, frothing-over mode of testifying, in which wild claims and far-fetched connections might be asserted that had little to do with the intentions or concerns of the artist. 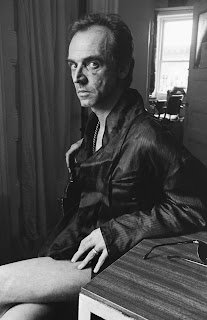 Another section in "A Girl of the Zeitgeist" also seemed to have a possibly discomfiting resemblance to certain phases of certain music papers. This time it's the critics Thomas McEvilly and Max Kozloff who are speaking: 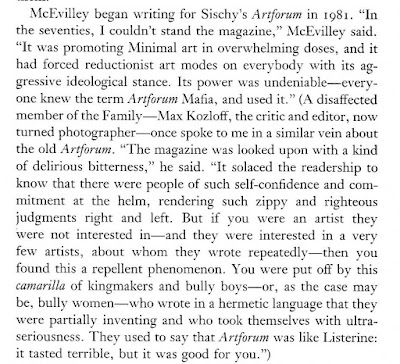 Fortunately the weekly music papers - being so large and coming out so frequently and therefore having so much space to fill -  were almost forced  to be pluralist.  Unlike a monthly periodical with smaller space and a tighter coterie of writers, such as  '70s Artforum or October, the journal founded by Krauss and others who quit Artforum after an ideological rift. But also unlike a music fanzine. Of necessity, just to fill up the pages on a weekly basis, each music paper accommodated many voices. Consensus was harder to marshal except at exceptional moments of urgency in music history, like punk.  And even then, there were other kinds of music that needed to be covered - the established music scene and older bands didn't just cease to exist punctually with the arrival of punk, they kept on putting out records and touring. And there were genres completely outside the Old Wave / New Wave rock narrative.
The closest thing to 1970s Artforum in music paper history I can think of is NME's almost-total exclusion of New Wave of British Heavy Metal and Oi! from coverage. But even then, it wasn't like the paper was 100 % post-punk. *
Also fortunately, even those music writers with I-Be-the-Prophet traits, tended to be more plural in their tastes. The  fast-moving, ever-changing nature of the music scene would usually buffet them out of their tunnel-vision fixity, forcing a rethink. Or they might simply be attracted by different scenes/sounds at the same time, requiring the suppleness to entertain different value-schemes simultaneously, oscillating between ideas from piece to piece. 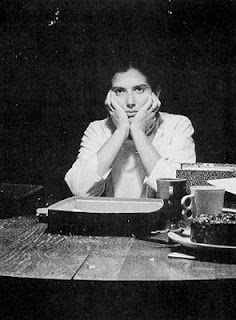 Still, I have to say (and here's where the forbidding intellectual glamour of Krauss comes in) I can't help but admire, still, this drive to totalize the field of current art production, to create a shapely picture that shoves the irrelevant to one side and projects a forward path through the mess.
Because nothing's lamer or less useful really than eclecticism - liking a bit of this, liking a bit of that, for quite different reasons. Someone operating as a critic from that sort of non-stance, however neat their turn of phrase or sharp their sporadic insights...  it seems like a bit of a cop out really. I mean, from what basis do you issue your opinions?  If you've not mustered the will and determination and sense of purpose to formulate a system, or even a coherent perspective, why then should I put any credence in what is really just a random succession of reactions and judgements?
It's a career path, though, for sure....
Someone once quipped of me - this was at the peak of my MBV/AR Kane/first-phase post-rock belief in the becoming-abstract destiny of electric guitar music,  the figurative focus of the human voice disappearing into rippling bliss-folds, texture >text - that I was in danger of becoming the Clement Greenberg of rock crit. Now I had not heard of Greenberg, so quickly acquainted myself with the precepts -  and concluded that this was simultaneously a high compliment and a sly and savagely on-point insult. (And perhaps a sage bit of advice, a friendly warning).
Luckily, rave came along to knock me out of that particular loop and into a different orbit... 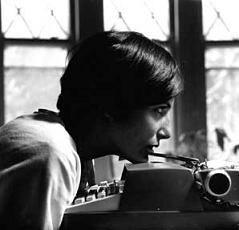 * Belatedly recalled this comment made to me by Andy Gill, who wrote and edited for NME during the postpunk / new pop / soulboys versus indie era: "We used to have editorial meetings at NME - they were ghastly affairs, arguments about genres and which things should be covered and which things should be ignored. I would be thinking 'we should just cover all of this'. I could never understand the factionalism, and the absolutist nature of the factionalism".
But I suppose what I'm saying is, "I did  - and still do - understand the factionalism, and the absolutist nature of the factionalism. Wouldn't necessarily want to live there anymore... but I also know it gets results".
Posted by SIMON REYNOLDS at 10:52 AM
Labels: ART CRITICISM, ARTFORUM, BNF, CARTER RATCLIFF, JANET MALCOLM, NME, OCTOBER, RENE RICARD, ROCK CRITICISM, ROSALIND KRAUSS, THOMAS MCEVILLEY
Newer Posts Older Posts Home
Subscribe to: Posts (Atom)