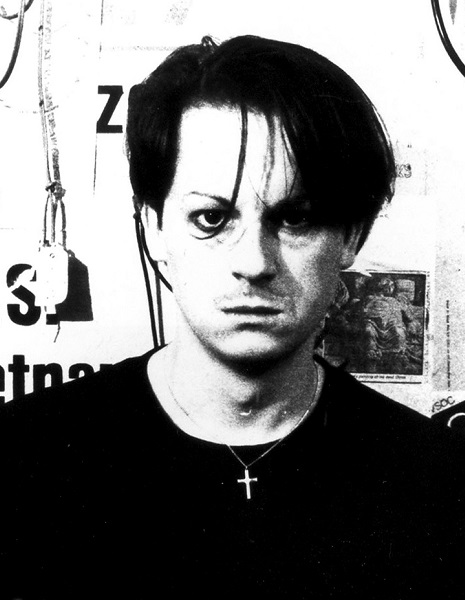 Truly saddened to learn of the death of Richard H. Kirk, all-round sonic visionary and - it's not remarked upon often enough - one of the great postpunk guitarists.

He is most renowned as a founding member - and the longest lasting member - of Cabaret Voltaire. But along with the Cabs's astonishingly productive peak-era run of sustained innovation and strangeness - one of the truly original, unlike-anything-else sounds of that time - Kirk enjoyed a second golden moment  in the early 1990s with his collaborative techno projects Sweet Exorcist and Xon, through which came some of the greatest Yorkshire bleep tracks. Tenacious bugger that he was, Kirk carried on making interesting records in great number under a profusion of aliases (including a stream of  "machine soul" / electronic-listening-music EPs and LPs as Sandoz) right up to last year's Shadow of Fear, a fine restatement of the classic Cabs sound.

I didn't know Richard well, but do have fond memories of him generously giving me a guided tour of Sheffield postpunk landmarks on a grey, intermittently rainy day during the summer of 2002, when I was back in the UK to research Rip It Up and making similar expeditions to Manchester and Bristol hoping to detect any lingering aura-of-era that might still cling to particular buildings and streets. In Sheffield, many of the sites of historical interest to the postpunk scholar had been effaced by the passage of time. But Richard showed me the building where Western Works had been located, the road where Adi Newton lived in a fetid den of artistic and lifestyle experimentation, the record and book shop Rare and Racy (a longstanding hub for the city's left-field listeners, still in vibrant fettle in 2002) and various other nodes of oppositional culture. Then we went for a curry before I headed back to London on the train. 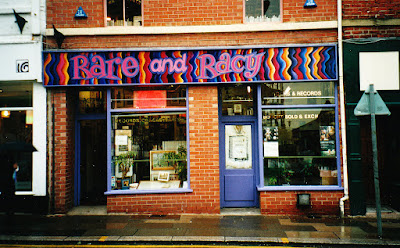 I first met Richard many years before, early in my time at Melody Maker, when I went up to Sheffield for the first time, to do a cover story on Chakk, one of the better second-wave avant-funk outfits who came in the wake of Cabaret Voltaire and 23 Skidoo.  Chakk manager Amrik Rai took me round the Cabs's gaff, where I was surprised to observe that they enjoyed a puff (somehow it didn't seem to fit their stern, no-hippie-shit image). Later in 1986, I interviewed Kirk & Mallinder - if memory serves in London, at the ICA bar. They seemed at a bit of a cross-roads - if not as disconsolately rudderless as Sheffield peers Heaven 17, who I also interviewed around that time -  then not knowing quite where to go next. They'd done a series of cool records through the Some Bizarre / Virgin arrangement, culminating in The Covenant, The Sword and The Arm of Lord, which I'd liked a lot, but they hadn't broken through as hoped. Soon they were to make a bid to go even nearer the mainstream, signing to EMI and taking on a glossier club-targeted sound.  Cabs fiends disagree about that phase. Kirk would have more success  penetrating the house scene - and sounded more convincing and compelling - when he partnered with DJ Parrot as Sweet Exorcist, releasing the early Warp classic "Testone".  A pioneer of industrial dance was reborn as a hardcore rave forefather.

(Read this interview with DJ Parrot aka Richard Barratt, which has stuff on the primitive set-up they struggled with to make "Testone")

After that milestone of emaciated minimalism, Sweet Exorcist released a mini-LP of maximalist bleep titled C.C.C.D., whose title track "Clonk's Coming" is an under-appreciated wonder.

Then there was Kirk's collaboration with bleep pioneer Robert Gordon as Xon, resulting in gems like "Dissonance" off the 1991 EP The Mood Set.

Here is a stash of writings by me on Cabaret Voltaire and Kirk's bleep + bass works. And below just a handful of top tunes.

And here is a Tribune tribute to Richard H. Kirk by Owen Hatherley, situating Cabaret Voltaire and Sweet Exorcist in the political and socioeconomic landscape of the post-industrial North.

If  - and this seems unlikely, knowing the readership - you happen to have never heard any Cabs music, may I recommend checking out Eight Crepuscule Tracks? It's the perfect distillation of peak-era Cab creativity - their equivalent to The Fall's Slates 10-inch maxi-EP.  (And yet not quite equivalent - Eight is a 1987 expansion of the Three Crepuscule Tracks EP, originally released in 1981 - the same year as Slates)

For some of Kirk's more obscure techno/bleep era excursions and aliases, check out this tribute thread at Dissensus. 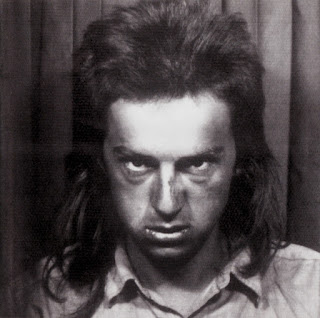 For a cultural and material topography of postpunk Sheffield, check out this interview I did with the late Andy Gill, the NME's Sheffield correspondent during this legendary time and friends with the Cabs and most of the other significant musicians in the town.

Here's what Andy had to say about the Cabs and RHK:

“... Before the Cabs had a record out, they used to come into Virgin, where I worked.  I had hair down to my waist in those days. They came up to the counter and asked 'Have you got any records by Cabaret Voltaire?'. I’d heard of the name, and what I’d heard about them sounded really intriguing to me. So, I said ‘As far as I know they haven’t got anything out yet, but I’d really be interested in hearing them, cos it’s my kind of thing.’ I remember them being quite shocked that this guy who looked like a Ted Nugent fan was heavily into that kind of that stuff. Ever since then we’ve been mates....

"Mal and Rich and Chris  and their gang were heavily into the sonics of Roxy. Although Mal was heavily into clothes too.  He had two rooms in his flat, and one room was where he lived and the other was his wardrobe – and he had an ironing board in the middle of it. It was just completely full of clothes. Mal was the most stylish person I’d ever met; he always had a consummate sense of style.

“The early Cabs gigs were trying to get a reaction – it was a racket, just squealing noise. And there’d be films behind them of god knows what: biological warfare experiments, people in chemical warfare suits. They’d collect old Super-8 footage of things like that.

"Around 1975 or 1976, we became friends. They had been going since ‘73 or ’74. So, it was a bit after that I got to meet them. They had this studio in this old industrial building. The whole building was called Western Works – and they recorded in it and called the studio Western Works.”

“Richard’s always been a bit stroppy –in that very Yorkshire way. He can be hellishly stubborn. That’s a typically Yorkshire thing:  ‘if you say don’t do this, I’ll do it’.  He’s got that thing in his voice.

"In Sheffield, it wasn’t like the London Musicians Collective, where everyone’s got wire-rim glasses and that sort of avantgarde middle class attitude. In Sheffield, it was working class Dada. They were heavily into Dada and liked to get a reaction. Wake people up. Richard, then, mainly played guitar and clarinet. Mal did rudimentary bass and vocals, treated beyond legibility." 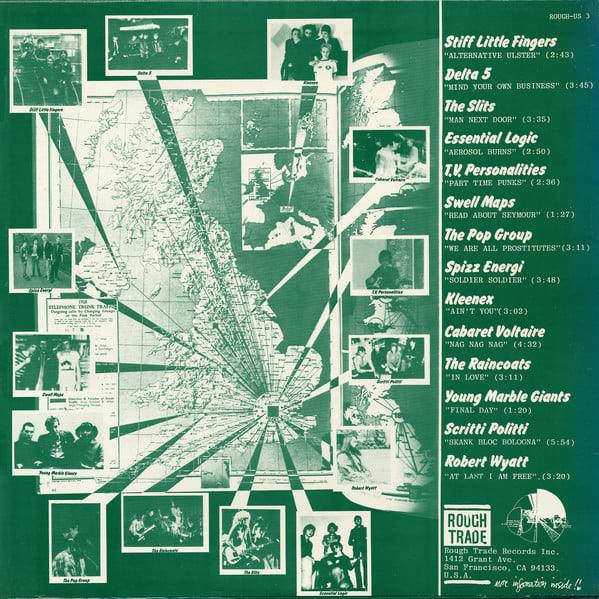 Lost in their music

Sometimes, when writing about a revered legend, you can reach a point where you find yourself thinking, "why do I ever listen to anything else but this?". So it was with the subject of my new piece for Tidal, the Chic Organization and its dominance of the Eighties audio Zeitgeist. Listening to non-stop Chic, Sister Sledge, the album Rodgers & Edwards wrote and produced for Diana Ross, etc, for several days, I was truly "living in ecstasy". But then the obsession focused to where I only wanted to play a single single - "Everybody Dance" over and over. Then it zoomed in further still and I was just playing Bernard Edwards's miraculous bass break again and again and again. (Some "air bass" did occur, I confess).

But how about the ChicOrg deep cuts?

This is almost too obvious to mention, beautifully doubled as it by Robert Wyatt's version.

I also found myself fixated on these albums cuts, "Happy Man" and especially "(Funny) Bone" .
Love the singles off Diana Ross. "Upside Down" particularly - unusually for Chic Org, the fast-flecked rhythm guitar takes a very far-back back seat and the arrangement is based around some wonderful piano vamps. This somewhat overlooked beauty was the third single off the Diana Ross album and funnily enough it's called "My Old Piano".
"My Feet Keep Dancing" was a Chic single but it felt less familiar to me - it has this wonderful steadfast chugging groove with a slightly involuntary, forced-march feel to it, and then this really gorgeous glassy motif that I think is electric piano, a real ice cube sliding down the back of your neck tingle effect.
That "forced march" feel fits the lyric, which is a bit like Ian Dury's "What A Waste" crossed with The Red Shoes and They Shoot Horses, Don't They?
Fly into space or maybe save the human race
All these things seem so appealing
But I'll never get the chance, 'cause all I do is dance
My mama said my brains are in my feet
Albeit with a happy ending, the affliction turned to career path:
"So I ran away from home to live all alone
And make myself a standout in the crowd
Then it hit, my ideas began to fit
I had to be what I was meant to be
Now my name is up in lights and I hoof here every night
They were right my brains are in my feet"

I had great fun chatting with the Rock's Backpages crew - Barney Hoskyns, Mark Pringle, Jasper Murison-Bowie - for this week's RBP Podcast.  We talked about the UK music press and my time on Melody Maker, about Bob Stanley and Saint Etienne's Foxbase Alpha, about Heaven 17's Penthouse and Pavement and a whole bunch of other things including the late Lee Perry and the late Charlie Watts.

This week at Rock's Backpages, there's also a spotlight on some of my archival pieces, including a review of the 1987 Monsters of Rock Castle Donington festival, an appreciation of Joy Division based around the film Control, and "Worth Their Wait", a tribute to the print music press of yesteryear,  There's also a 1991 piece of mine on Saint Etienne as part of their St Et spotlight, linked to their new album I've Been Trying To Tell You.

They also have a piece on mine of roots and dub reggae as part of their Lee Perry tribute.