(this is in addition to output from surviving original producers in the long established Chicago/NYC house tradition (like Dennis Ferrer) plus plus contemporary clubtrax that basically adhere to the house template but bang 'n' bosh it up a bit with filter and trance and digitalizm elements in the mix (Swedish House Mafia)plus all the house-trance/ibiza-lasvegas based stuff in the Top 20 pop charts plus "the kind of international trad house [i.e. not UK funky house] that currently dominates a lot of the pirate shows" in London according to Blackdown.)

house is clearly rich and long-running and wide-in-scope a tradition to seed off a whole range of retro-house throwback styles...

but equally: hasn't house always had its own innate tendency towards harking back self-reflexively? it's always been as much about invocation as innovation... about the celebration of continuity and continuum-ity... certainly at least since the invention of the idea of deep house (end of Eighties, a swerve away from ACIEEED by many of the people who invented acid house, including Pierre/Phuture himself... and then in UK terms Shoom-head Danny Rampling embraced the New Jersey sound pretty swift I believe as a reactive (and reactionary) move against the Acid Ted incursion

there's always been a side to house that was conservative and preservationist: not acid tracks and jack tracks (i.e. the becoming-hardcore half of its soul - of which Green Velvet was its own resurrection, in a way) but the keep-on-holding-on to disco-underground principles side (as manifested in Cajmere, or a track like Gusto 'Disco's Revenge" )... the idea of "true people" was invented for Detroit by Eddie Flashin' Fowlkes but it is just as applicable to house's self-image

that ethos was always particularly strong in Britain, and indeed one the things that turned me off house for much of the 90s... the fidelity, the purism .... and above all the epigonic narrative of decline that everyone who gets into this music, at whatever point in the timeline, seems to buy into... the location of "Better Days" in the rear-view mirror, rather than just around the corner

Take Black Science Orchestra's album Walter's Room. Named in homage to NYC remix pioneer Walter Gibbons. Nod to Philly's orchestrated lush proto-disco with track "City of Brotherly Love". Another nod to Philly with the track, um, "Philadelphia". Jersey and NYC homaging tracks with titles like "New Jersey Deep" and "Hudson River High" and "Downtown Science". Track that'll make any NYC resident snigger a bit: "St Mark's Square". Cringe-inducing titles like "Rican Opus #9" and "Heavy Gospel Morning" and "Bless the Darkness". All couched in a musical setting of pallid luxuriance and mild slinkiness that is pleasant enough in its tepid way but just as historically redundant as Hives and Jet were in their own traditions.

Black Science Orchestra was masterminded by Ashley Beedle. A different kind of dance-retroism was pursued in his other supergroup project The Ballistic Brothers, particularly with their much-ballyhooed-at-the-time, now unremembered album London Hooligan Soul. 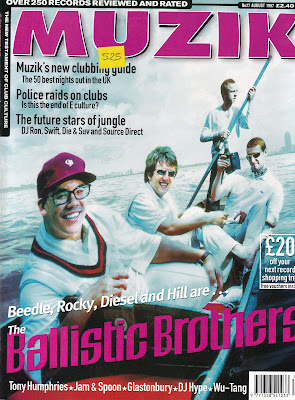 If our memories serve us well... Bunking school for crackers on a Friday lunchtime, forget your dinner ladies. Pirate radio,codes from the underground...Saturday night blues dances and forbidden moves to Phoebe's,Four Aces and Club Norick. Shaka, Fatman and Sir Coxone, the original drum and bass. Sneaking out of the back door with your brand new shoes. Saturday's alright for fighting. Skinheads getting a beat down, ambush in the night. Stuarts in the day Fila, Lacoste, Tacchini, Armani, Lois, Nike and Kappa. Taxing the rich and famous and rushing the Burberry door. Scoring a draw down the Saints. A pick up from the SPG. Blair Peach a crying shame the NF and unmarked police vans who is to blame? Clash city rockers and white men in Hammersmith Palais. Road trips to Caister, Soul Tribes, The Frontline and the Soul Partners. All dayers in Bournemouth taking the train, taking a train, ego trip dabbing speed it's all you need. Westwood, Family Quest no contest. West End B-boys and fly girls, chrome angels Graff bombing the Met. Breaking in the Garden ... Covent to you suckers. An armful of Studio 1 from Daddy Peckings. Flim Flam to Meltdown. The Jay Brothers, goodtimes and great tribulations. Gilles P and Paul Murphy Zulu style at the Electric. Brother Paul boogie times. The Beat Route and Hard Times. Fifteen years of fucking Tories, on the dole, a thousand stories of promised lands and meccas - Blackpool. To you the sweet sounds of Levine and Curtis. The Language Lab said and Dirtbox spread and old bill cracking miners heads. Who killed Liddle Towers? The Jam at Wembley seven times and National Health for the last time. Bump and hustle, soul 45s, too far gone there is no way back. Phuture, Acid, Confusion, The Rush, The Love, the smiling hooligan with dodgy gear open minds close and get the fear. East Grinstead and Bognor lads away, falling and laughing, escape to Brighton or off to Ibiza tying to maintain the buzz. Getting older and getting wed. Elvis is dead. Is anybody out there? A poll tax riot going on. They have sold my country...

It reminds me a bit of Garry Bushell's impressionistic "set adrift on memory bliss" freeflow blurb on the back of the Strength Thru Oi! comp, but with rather different reference points... a different version of working class youth-style.... a different route, in fact, from The Clash... closer to the route Mick Jones actually took into Big Audio Dynamite in fact

this Ballistics tune is all right in its repro antique way: reminds me a bit of when the Heavenly Socialists like Jon Carter did Big Beat meets rocksteady type tracks

Of course Ballistic Bros were on Junior Boys Own. As in Terry Farley who was Chief Inspector in terms of policing house music in terms of its fidelity to the source, via his column in Muzik (or was it Mixmag?) in which he was wont to talk in vexed tones about "proper black dance music"

talking of which, here's "Blacker" from the Ballistic Bros's 1997 follow up album Rude System

note the "blacker than thou" sample at the start

and then there was the Black Jazz Chronicles on Nuphonic, home of Idjut Boys and Faze Action (debut LP Original Disco Motion) and others who verily wanted to go back and dwell forever inside Walter's room

and in fact one of Ballistic Bros and possibly Black Science Orchestra too was Dave Hill the dude who founded Nuphonic. So it all ties together! (This is getting to be like one of those Kev Pearce/Yr Heart Out follow-the-lines jobs innit -- all it needs is a couple of studio engineer names plus a snideswipe about yours truly!)

-- after the career peak of getting to #2 in the charts in his alter-alter-ego X-Press 2 (with "Lazy" featuring David Byrne on vocals) he spent the 2000s heading the labels Soundboy Entertainment, Afroart, and Ill Sun

-- released an album in 2010 on K7 as another alter-ego, Mavis. (A nod to Staples, presumably. I think I got sent this. It features vocals from Candi Staton but also unlikelies such as Sarah Cracknell and Edwyn Collins)

-- Beedle is referenced in the Daft Punk song "Teachers."

Did that really get to #2 in the UK pop charts?

* thinking about the semiotics of "silk" as in 100% Silk, obviously Steve Silk Hurley aka JM Silk springs to mind.... or the great late-disco West End track "Do It to the Music" by Raw Silk... but then how about King Britt (the US equivalent to Ashley Beedle in many ways, except Britt's actually from Philadelphia) who started out as a resident DJ at Silk City in Philadelphia, later recorded as Sylk 130, and recently did the Black Science/Afrofuturist type project Saturn Never Sleeps inspired by a certain Philly jazz god. But equally "silk" is part of the imagery of UKG, as in Pure Silk the club/compilation.

which then makes me ponder how Dave Keenan is mentally managing the drone/lo-fi/hypnagogic scene's turn towards the very Nineties zones he always reviled as "Dance Plodders" -- Volcanic Tongue blurbs for 100% Silk 12 inches often try to throw in the words 'kosmische' or 'psychedelic' presumably to mitigate against its rather more apparent resemblances to electroclash / Metro Area / Italians Do It Better
Posted by SIMON REYNOLDS at 10:00 AM
Newer Post Older Post Home