It was 1982 that I got into "The Sixties."  Well, for a while I'd already had, taped off a friend, the blue and the red Beatles compilations,  and I'd picked up on vinyl  the double-LP Rolled Gold (the Stones '60s singles + odd album cut) and the similarly collated Doors double Weird Scenes Inside the Goldmine. But  the academic year of 1982-83 was when I got really into "The Sixties," in that Motown / Dusty Springfield / Sandy Shaw / Manfred Mann / Dave Clark Five / Georgie Fame / Hollies / Petula Clark / Small Faces et al way - sounds that instantly conjure a whirling cliche-images vortex of Carnaby Street / Mary Quant  / The Knack (and How To Get It) / Smashing Time / kids capering through city centers, shopping arcades and parks without a care in the world  etc etc.

Part of it was getting friendly with a boy at my college, Zaki, who dressed like he actually lived inside the 1960s -  an out-of-time modernist with pointy shoes. On the floor of his digs sat several cardboard boxes full of 7-singles, some of them in picture sleeves, and others with the centers punched out. I taped a heap of these singles off him. Zaki also hipped to me some of the Sixties groups who'd never made it, like The Action, The Creation, and John's Children, whose music was then being reissued for the first time on album-length compilations  (I don't think he could afford the highly collectable original 7-inch singles, although that would have been his preferred format, ideologically).

In that first flush of Sixties-love, the single that seemed to me to be the absolute quintessence of Sixties-ness was "For Your Love" by The Yardbirds. But even more impressive - a harbinger of future preoccupations with sonic overload, what David Stubbs would call "the New Guitar Air" of the late '80s - was "Shapes of Things".  And it's one reason why Jeff Beck has a hold on immortality.

Another is "Over Under Sideways Down", like "Shapes" very much Beck's brainchild, sonically.

People swear by "Happening Ten Years Time Ago" although it never quite grabbed me as much as the previous two. But certainly in historical terms it's a notable stride into the era of the Guitar Hero - two heroes in this case, Plant and Beck.

What are Jeff's other holds on immortality? Hmmm, well, now we get into shaky terrain.

Beck is famously - notoriously - the archetype of the great musician who hasn't been involved in many great records, and the least of them have tended to be the ones that bear his own name.  "Uneven" would be generous.

In the early '90s, when the record industry was at its fattest, Columbia / Sony / Epic Legacy had me on their mailing list for box sets. I was writing quite regularly then for New York Times, perhaps that's why. All kinds of unlikely shit came through the post - a Santana box set, an Aerosmith box set, a Ted Nugent box set for fucksake. Many others that I only got one disc into and a few I never even opened at all, but still own (Earth Wind and Fire - and I love EW&F, the golden stretch with I Am in the middle of it, but there's few things more appetite-suppressant than the sight of a box set, am I right? Reviewer's droop, you could call it).

But you can tell what comes next... I got sent the Jeff Beck box set Beckology. Styled to look like a Fender guitar case. A guided tour across his scattered discography. A traipse across barren vistas. 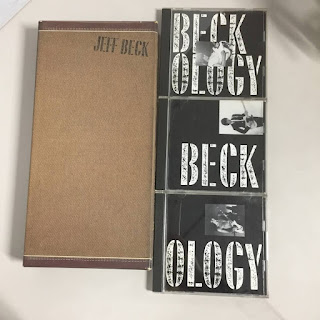 Back to the Yardbirds. Alongside Beck's spotty career, the afterbirth includes Led Zeppelin (a guarded thumbs-up) and Eric Clapton's various endeavours (a fairly firm thumbs-down, give or take the odd smidge of Cream). But their real achievement was a knock-on - being the single largest influence on American garage bands. More than Them, more than the Stones even.

After 1982's first flush of Sixties infatuation, I became an ardent acquirer of compilation series like Pebbles, Mindrocker and Back from the Grave,  taping some (Zaki was a source) and buying others, and purchasing the odd single-artist reissue too, like Mouse and the Traps, Nazz, and The Music Machine.  Alongside Them's"Gloria", the Yardbird's restructuring of "Train Kept A-Rollin'" became one of the standards of the time, covered by a legion of regional no-hopers.

Meanwhile my pal Paul Oldfield chose the path of freakbeat (I'm not sure it was even called that yet), picking up compilations with titles like Chocolate Soup for Diabetics and The Perfumed Garden as well as single-artist reissues by The Eyes and John's Children. He preferred the English combination of fey and feral, whereas my state of hormonal insurgency at that time found a better fit with the more rampant and less androgynous American stuff. (Since then I've come to share Paul's view, finding the Anglo-freak stuff more magical and plain peculiar - but there's not a lot in it and we are basically, in both cases, talking about some of the most exciting music ever made - in a true, deep-core sense, music for ravers and raving). 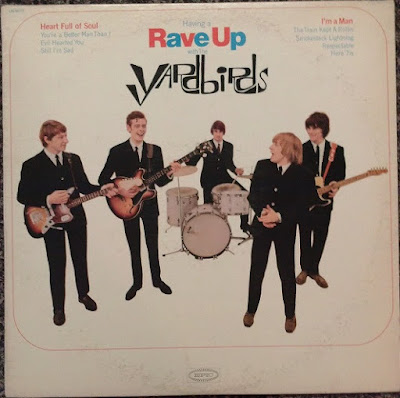 The hallmark of Yardbirds songs (like their reinvention of "Train Kept A-Rollin'") is the 'rave-up', a  climactic passage of double-time rhythm and frenzied solo-guitar.

The Yardbirds can claim to have made major donations to the DNA of both garage punk and freakbeat, so that's some more credit in the Jeff Beck ledger.

Another fingerhold on immortality for Jeff Beck: he appears with the band in this iconic (no really, the word is warranted) scene in Blow-Up (one of my Top Five films of all time) where they play "Stroll On", essentially a rewrite around the riff of "Train Kept A-Rollin".

A big Blow-Up fan, Paul O would discourse about this scene at the Ricky Tick club - the impassive, affectless audience,  the frenzy that erupts as they all fight for the talismanic guitar-debris tossed by Beck into the crowd, the photographer's determination to get possession of it and the way he then discards his prize in the street outside, where it becomes a non-sign, mere meaningless rubbish to puzzle passers-by.  Hilary, Margin / Monitor's resident radical feminist (and Paul's girlfriend) would insist that the only notable thing about  Blow-Up was its dolly-bird era misogyny. But does the depiction of a misogynist count as misogyny? (It might be its opposite, in fact). Also, Vanessa Redgrave's character is fairly formidable and gets the better of the sexist photographer in the end.

Another dollop of credit in the accounts book: Beck appears to be the inspiration - sartorial and coiffeurial and mannerism-wise at least - for Nigel Tufnell. 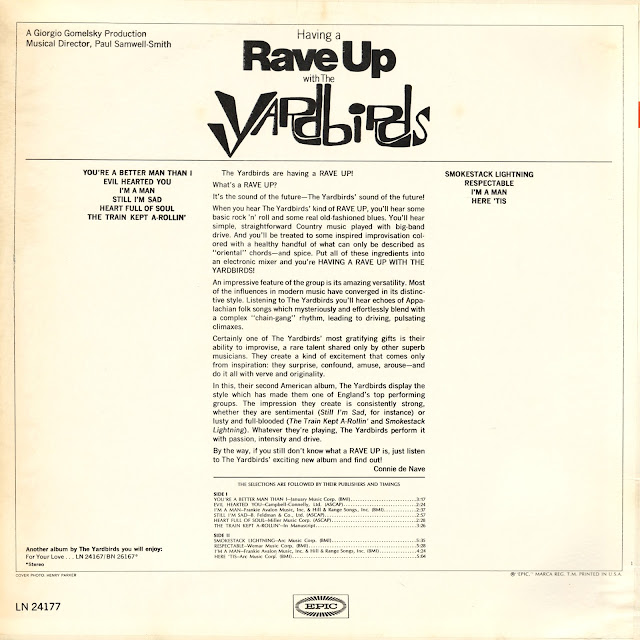