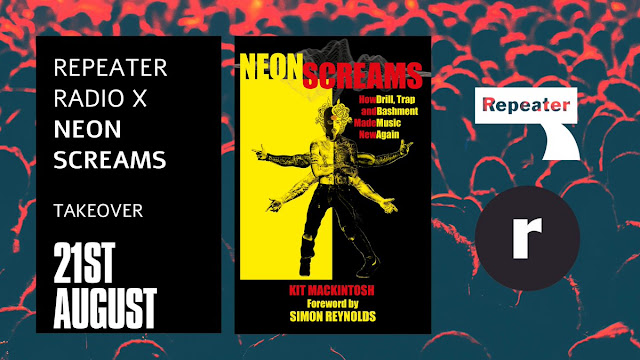 In the intro to Rip It Up, I suggest that “young people have a biological right to be excited about the times they're living through”. Elsewhere I have gone further and declared that there's an almost ethical obligation, for a young music writer, to remake your time as an adventure. Talk of rights or duties is rhetoric, but what could be safely ventured as an observation is that there do seem to be a few individuals in each generation who, through some special combination of excitability and ability, are prepared to take on the task of writing up the musical era they happen to inhabit as a rolling real-time golden age. If they're especially fired-up and impatient, they might also shove that vision in the faces and down the throats of the elder-wiser generation, the half-dead septic sceptics.

Kit Mackintosh is just such a young hothead - a holy convinced convert to his own credo of the 2010s as a  renaissance of sonic futurism. But in Neon Screams: How Drill, Trap and Bashment Made Music New Again - not only his debut book, but his first published writing  - the 25-year-old Mackintosh doesn't simply froth fervour: he makes a case.  Unlike in the hallowed 1990s, he argues, the new phuturism has manifested itself not in the domain of beat-construction or sound-design, but in the interface between pitch-correction software and flamboyantly individualistic MCs and singers. Vocal mutation has been a field of action across the genrescape, from Melodyne-designed Top 40 pop to conceptronica to the online welter of Auto-Tune-blitzed microgenres. But Mackintosh’s focus here is the street sounds – dancehall and trap - where the synergistic symbiosis between soft technology and expressive eccentricity is pushed to the most delirious extremes. Although less prone to what he terms “vocal psychedelia,” UK Drill is also celebrated in Neon Screams as a sonic vanguard rather than just a sociological phenomenon / media panic (although its gang-related lifeworld, as it informs lyric imagery and group self-mythology, necessarily comes into the ultra-vivid picture painted).

When I read Neon Screams a Marshall McLuhan quote sprang to mind:  “Youth instinctively understand the present environment – the electric drama. It lives mythically and in depth.” In the foreword I contributed to the book, I note how the performers that Mackintosh champions  – Vybz Kartel, Tommy Lee Sparta, Alkaline, Rebel Sixx, Future, Quavo, Young Thug, Playboi Carti, Pop Smoke, to name only the most possessed and Tourettic – seem drawn to Auto-Tune because it “feeds into and magnifies their own grandiose self-images… fits their fantasies of superhero powers.” I further point to the way Mackintosh “surrenders to the mythopoeic visions emanating from this music”, allows them to supercharge his prose through “imaginative contagion”. It's this intense identification and merger with the music, along with the writing's brio, humour, and occasional delicious spurts of spite, that makes Neon Screams such a rush to read.

Neon Screams is published tomorrow August 10th. There's a London launch event tomorrow for the book and Repeater's reissue of Junglist - it's at the Social, 7pm to 11 pm, details here.

Look out for a chat between Kit and me about the book’s polemics and provocations on an upcoming Repeater Radio show later this month - it goes on Saturday August 21 at 8pm UK / 3 pm East Coast / noon West Coast and then gets repeated, for early risers / night owls, Sunday 8 am UK / 3 am East Coast / midnight West Coast.  Each broadcast of the discussion is followed by a Kit mix of Neon Screamsy tunes. Try also these playlists - bashment, trap, drill. - for a sense of the sonozeitgeist he's championing.

From a young hero to an older hero…  As I’ve said a few times now, Barney Hoskyns has been a profound formative influence on me - a role model of how and why to do this. And although it's likely more just how things panned out than intentional evolution, I do seem to have mirrored Barney’s arc  - starting out penning delirious mystic-nihilistic paeans to self-“destruction” through sonic ecstasy, then finding a way to a more sane and livable relationship with music; from prophet-of-the-present to  historian of pop and unpop.  In truth, even as he was real-time mythologizing groups like The Birthday Party, The Fall, Blue Orchids, Meat Puppets, Black Flag, et al, from the start Barney had an unusually wide and deep sense of music history: stray references in his pieces to records like Forever Changes, Astral Weeks, and Marquee Moon led me to lifelong revelations, as did features like his 1984 profile of John Martyn - which directed me to Solid Air, another inexhaustible gift.

It struck me that I might actually own more books by Barney than any other author, with the possible exception of Ballard. It’s a great pleasure to add to the Hoskyns shelf God Is In The Radio, his new career-spanning collection of reviews and interviews.  As the subtitle Unbridled Enthusiasms 1980-2020 makes clear this is a celebration of the artists and recordings that have abided undimmed as sources of solace and sublimity in his life. The scope goes from a luminous Bobby Womack profile to a Burial paean, via insightful career surveys of Scritti Politti and Cocteau Twins (a group I once dismissed as vaporous guff after catching one whole side of Head Over Heels on Peel, until Barney’s review guided me towards the right way to hear them) and another 46 appreciations ranging from Sly Stone and Laura Nyro to Associates and Prefab Sprout. 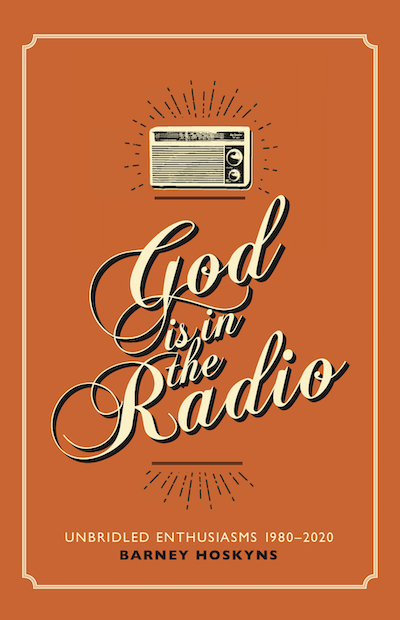 As the title God Is In The Radio hints, and as Barney movingly details in the preface’s inventory of stages in his relationship with music starting age four, if there’s a threading subtext that connects these pieces it involves the way music can serve as a substitute sacred for the secular; a surrogate religion offering regular doses of deliverance and transcendence, relief and release. Music stills the voices of doubt and fear; it fills the emptiness; it dissolves the Insoluble. Consistent in its blissing and blessing, it's one of the main reasons to stick around.

In the preface, Barney writes about suspecting that for him (and by implication people like him) “music is a proxy for emotion itself: it is the way I feel, dissolving the rationalisation of feeling and enabling me to experience joy, desire, pain, loss, sadness, defiance and gratitude that might otherwise remain out of reach.” Certainly, for whatever reasons – nationality, gender, class, or some admixture of the three – music has an unmatched capacity to bring me to tears, in a way that hardly ever happens in real life, even during the worst of trials. (Certain films, too, have this cathartic effect).

Barney further writes: “Indeed it almost seems to me the point of music that it frees us from the constrictions of thought..." But of course, being constitutively a writer, he can’t help striving to articulate this “speech of the heart”, he wants to think the escape from thought’s constrictions.  His writing* has been a model for me of a criticism that lets itself melt into worship, music journalism that shifts back and forth between telling the story and testifying.

* which reminds me that writing itself  (alongside dear ones and Nature's beauty) is another of those main reasons to stick around. Doing it, reading it - it's another way to slip through the bars of the self-cell.