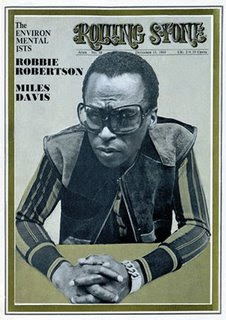 Connecting a few recents dots… if I'm not mistaken, those Company and Incus records, I actually borrowed and taped them from West Norwood Library...

Thinking about it some more, the Deleuze & Guattari quote about "a scribble effacing all lines" is probably much more applicable to (and doubtless was originally more inspired by) free jazz/fire music than non-idiomatic improv, which is quite capable of being spare, spacious, still, ruminative and reductionist (see the "New London Silence" and "lowercase" currents in improv, with which Wastell's been connected) as it is of being a 200 m.p.h. blast of honkathonic screech. "Scribble effacing" also applies to an awful lot of noise music, especially the power electronics/Merzbow end of things… The slippage from the kind of aesthetic fascism D&G warn about to the other kinds of fascism (including the party-of-one fascism of the serial murderer) makes perfect sense; it's the lyrical analogue to the sonic lust for a kind of annihilating absolutism, so-called "pure states" of being. (Incidentally Jeremy Gilbert, co-author of the excellent technorave study Discographies, just sent me a very interesting-looking essay he wrote on non-idiomatic improv that uses Deleuze & Guattari's ideas of the rhizomatic as a prism for analysing/celebrating that mode of music-making... picking up in fact from the links made in the Sex Revolts between D&G + Miles/Can/etc.... Gilbert's essay came out in a book called Deleuze and Music).

Now, non-idiomatic improv: that's music that has severed its ties with jazz, at least in the Derek Bailey version of its history, right? Jazz, though: been listening to that quite a bit of late. Partly because of a sudden impulse to "do" the 20th Century properly, having realised recently that large swathes of it I've only got a rather tenuous grip on (e.g. classical music that isn't concrete or electronic; jazz beyond those obvious rockcritic faves (Miles, Sun Ra, few others); blues; erm… the entire non-West!). Partly, also, because the idea of steeping my ears in the era of Giant Steps Forward seems distinctly attractive at a time when music is shuffling about in sheepish circles, marching on the spot, or retracing its steps. And finally also because I was recently favored with a CD from Woebot based around his last post before retirement, that lunatic-in-its-vastness survey of Jazz; a CD with 42 mp3s on it,ranging from Ellington to jazz-funk (I don't think there's much on it from the Eighties onwards, which rather suited me).

Absolutely fabulous stuff all, but I must admit that having listened to the whole three hours-approx a bunch of times, the stuff I seem to dig the most is the fusion. Or not so much fusion (precisely used that refers to Grover Washington Jr and Yellowjackets, right?) but jazz-rock specifically. Or "electric Jazz" to use Kevin Martin's much cooler-sounding and accurate-yet-open-ended formulation, the conceptual spur for that great compilation he did in 1996, Jazz Satellites. On the Woebot CD my favourite cuts are Mahavishnu Orchestra's "You Know You Know" , Don Cherry's "Brown Rice" (also on Jazz Satellites), Billy Cobham's "Stratus", Weather Report's "Non Stop Home," Roy Ayers's "We Live In Brooklyn"… and naturally the Miles Davis selections from In A Silent Way and Get Up With It, which I know like the back of my hand. I wonder why? Well, there's fusion's sheer groove factor: the breakbeat-y opening to "Non Stop Home" is worthy of The Meters, and in fact when the track gets more "jazzy" and less propulsive it loses some of its simpleton appeal. Mainly I think it's because the colour spectrum in jazz-rock is more varied and vivid, sometimes to the point of vulgarity, and for someone who's grown up with pop music and its studio-doctored textural palette that is going to give the music an advantage. It's a bit like the difference between a black-and-white movie and Technicolor. 70s jazz-rock/fusion equally doesn't really trigger the received images of suits etc that gets in the way a bit with earlier jazz, whether cool or hot, bebop or free; your mind's eye's mise en scene is less likely to be a stage in a crowded, smoky bar, and more likely to be cosmic, oceanic, rainforesty imagery, or urban panoramic. That encumbering baggage of jazz stylisation is not the original music's fault exactly but the crust of cliches definitely obstructs when it comes to recapturing the sensation of radicalism the music transmitted in its own day, the plunge into the unknown. (In the same way that it can be hard to recapture the wildness and sensual insurrection of 50s rock'n'roll).

On this topic, I've been reading bits and bobs of Stanley Crouch's collection Considering Genius: Writings On Jazz. He's a stylish writer so it's enjoyable even though I know I'm extremely unlikely to ever bother checking out any of these Nineties-onwards "keepers of the flame" type players he supports so gushingly (if only because I need to attend to so many of the original flame-igniters first). Enjoyable also because it's bracing to read someone pungently and often waspishly espouse a completely opposite ideology of jazz to the one I'd adhere to (both out of taste and out of instinct), i.e. this neo-conservative [i should have written: neo-classicist]vision Crouch has controversially pushed in tandem with his ally Wynton Marsalis via the Lincoln Center and that Ken Burns Jazz series (which I never watched). Basically their stance (crudely summarized) is that the essence of jazz is "swing" and blues feeling; it must be played on acoustic (and non-effected) instruments in real time; for this reason, the fusion era was an "aesthetic death valley" (and--this seems to really offend Crouch--a fashion crime spree; he's a big fan of suits and ties and is quite hilariously rude about the garish outfits Miles wore in the 70s and 80s, that whole "sci-fi snazz" look).

In a long Epilogue to Considering Genius, Crouch dreamily drifts through memories of favourite performers and performances from the last couple of decades, dishing out praise to newcomers whose playing is steeped in history and glazed with reverence, but also to "prodigal sons" who have returned to the Path of Righteousness. (Like Freddie Hubbard, who put away his platform shoes and plaid pants and became the sharpest dressed cat on the neo-classicist scene; the story goes that he renounced fusion after a Damascene revelation--being nearly electrocuted to death when "the wire to an electronic gadget he had attached to his trumpet was pulled through some water"!!!).

Freddie Hubbard, Keep Your Soul Together, 1973

In this long languid reverie, the musicians Crouch praises are always extending or refining "the language" of an early great; the ghosts of departed legends and dead mentors are always flitting through particular stretches of playing. All these winding lines of filiation traced between hallowed forefathers and their self-chosen sons reminds me of Harold Bloom's The Anxiety of Influence--except without the anxiety. It’s a literally epigonic vision of how music works, how it grows; incrementally, through renovation and careful craft, a glossy veneer of veneration applied in what seems to me the musical equivalent to furniture restoration. (Actually, this pro-tradition/anti-bohemianism/anti-iconoclasm standpoint is not unlike Joe Carducci's ideas about rock).

There doesn't seem to be much scope for the shock of the new, for Giant Steps Forward and especially not Sideways. Miles Davis gets no end of obloquy for leading a generation astray with the mirage of going pop and reaching a young black street audience; for mutilating his talent and squandering his gift. White critics of a certain persuasion also get major flak for championing these and other
radical-chic courting and/or street-crediblility-seeking downwardly-mobile moves within jazz, their support diagnosed by Crouch as part of their futile attempts to rebel against their own middle class backgrounds. For him, the embourgeoisment of jazz was its proper destiny; gentility and elegance are its essence (he quotes Albert Murray on how the first thing Man does once he gets beyond subsistence-level existence, is aspire to Style); a sense of heritage is its lifeblood and guardian. From the brothels of New Orleans to the Lincoln Center in uptown Manhattan…

But looky here, this is what Crouch says about In A Silent Way:

The swipe at "electronic instruments"--he's talking about the shimmering electric pianos of Zawinul and Corea and Hancock--one of the all-time great sounds in music!--plus McLaughlin's fantastic guitar. "Wallpaper ": he's slurring as "décor" what is really the album's great innovation, its environmental, immersive quality, the way a mood is stretched out to become an ocean of sound (and Macero's later production of Miles on specifically "He Loved Him Madly" I think it was, got cited by Eno as a major influence on him coming up with ambient). As for "maudlin"!!! - I cannot figure that one out at all.

For Crouch, In A Silent Way is where Miles's story as a creative figure and innovating icon ends, whereas I'm sure for a lot of us that's where it gets really interesting. How weird. For me, In A Silent Way in its entirety, the title track of Bitches Brew, side one of One The Corner, "He Loved Him Madly": that's ultimate music; not much else is up there with it, hardly anything higher.