The era of dance when the bass guitarist starts to go extinct...


There's one in the video for "Don't Stop the Music", by Yarborough & Peoples - now considered an archetypal "boogie" track (that's what Wikipedia identifies it as genre-wise) but at the time we'd just have thought of it as discofunk. But it doesn't sound  like bass guitar on the record. That rubbery, juddery, succulently squelchy sound is the template for S.O.S. Band "'Just Be Good To Me", as already nominated by someone several posts back.

On France Joli's  "I Wanna Take A Chance On Love", it's the intro's choppy, percussively scraped,  damped-strings rhythm guitar that grabs the ear - that and the great loping beat. But patience, patience ... wait for it, wait for it... an incredible basslick, whirring and grinding, is going to drop any second.  Then when the song proper gets into gear, there's a second bassline, more conventional but mighty.

It becomes hard with these postdisco records to work out who exactly is responsible for the bass - in this case it's most  likely someone involved with Crown Heights Affair, who produced the Joli album in question, Now!.

A track much favored by David Stubbs at his club the Meltdown, "Take A Chance on Love" (actually a flop in the real disco world, though).


Another Meltdown fave - Barbara Mason's "Another Man" - with synth-bass wobbling like cyber-blancmange.

It seems almost too obvious to play Peech Boys or D-Train.

Another fabulous B-line -  although inextricable really from the matrix of squelchy synth and that insane hissing hi-hat figure:

Here's an odd thing - Man Parrish, long before he got into making electro records, was signed to MainMan, the production company Tony Defries formed around Bowie. Lord know what kind of music he was making or songs he was writing at that time.  Then he got into disco...

Here's a bit about what he was doing in the late 70s:

"A native New Yorker, Parrish was a member of the extended family of glam-chasers and freakazoids that converged nightly on Andy Warhol's Studio 54 club. His nickname, Man, first appeared in Warhol's Interview magazine, and his early live shows at Bronx hip-hop clubs were spectacles of lights, glitter, and pyrotechnics that drew as much from the Warhol mystique as from the Cold Crush Brothers."

Here's a whole interview with Parrish, who's still around, talking about his extremely varied career.

Back to the Eighties...

I always forget about Grandmaster Flash "The Message"...  about what a great sound it had,  that wasn't really followed up anywhere else I don't think.

Whodini's "Magic Wand". I wonder who is responsible for the bass here - Thomas Dolby?


And now we come to the King of Bass - Kurtis Mantronik.

Who announced the nature of his game by calling one of Mantronix's best tracks: "Bassline"

Man, I was so into Mantronix in '86. They were much bigger in the U.K. for some reason than in the U.S. They headlined this huge hip hop event at Wembley in July '86 - UK Fresh. The sound was terrible, and half swamped by the din of the audience's whistles and air horns. 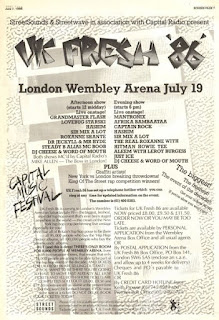 That's recorded through the board  - for a Streetsounds compilation -  but you can still hear the continuous scree of the whistle posse.


Originally on Cutting Records - a label right at the crossroads of NYC club sounds in the mid-80s - electro, freestyle, house, hip hop.


Nitro Deluxe = Young Manny Skretching Jr, from Philadelphia originally -  he played in Sun Ra’s Arkestra for a while, would you believe?


Old skool, they call it now - but originally, it was newest school, fresher than fresher. Exciting times!


That isn't even a bassline, but a nauseous churn of scratching.

And this is throat.

If synth bass started to put the bass guitarist out of business, the death blow came from an unexpected direction - a drum machine.  The Roland 808 -  whose kick, detuned, became a thick thud of booming low-end.   Bass then became something the producer or engineer handled, rather than a dedicated instrumentalist.


Which leads into the stuff that Graham has been writing about...
Posted by SIMON REYNOLDS at 5:46 PM
Newer Post Older Post Home