Freshly seeped, the latest batch of sour silage from eMMplekz - Rook to TN34.

Their best yet, I reckon.

And my favourite album of the year so far.

Danktronica by Ekoplekz aka Nick Edwards; rhythmatised verbals from Mordant Music aka Baron Mordant aka Ian Hicks... sordid pyscho-surreal effluent bubbling up from the UKid of the 2010s. 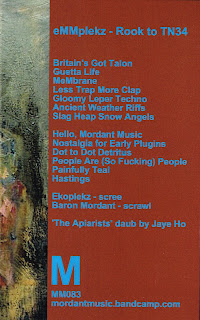 Choice matter from the platter - 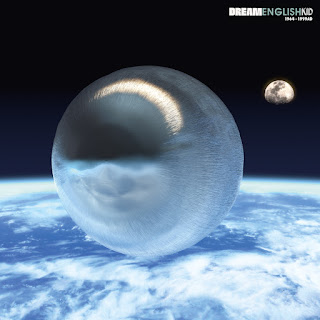 New album from artist Mark Leckey, the "follow up" to his Fiorucci Made Me Hardcore OST (which I described as "a remarkable piece of sound art in its own right")
- Dream English Kid 1964-1999 AD, on The Death of Rave label

The Death of Rave are dead chuffed to present the OST for Mark Leckey’s autobiographical film installation, Dream English Kid 1964-1999AD, arriving nearly four years since the Turner Prize winning artist booted off the label with his much-loved and inspirational Fiorucci Made Me Hardcore soundtrack - which was subsequently parsed by IVVVO on Mark Leckey Made Me Hardcore, and also provided a sampled backbone to Jamie xx’s In Colour LP.
In Leckey’s own words: “Dream English Kid began when I found on YouTube an audio recording of Joy Division playing at a small club in Liverpool. A gig I’d been present at but could barely remember. As I listened I wondered if, through enhancing the audio, I could actually find my fifteen-year-old self in the recording. That led me to think would it be possible; at this point, with so much imagery available in the digital archives, to reconstruct my memoirs through all the DVD re-releases, eBay ephemera, YouTube uploads and above all the resource of the internet itself; the way it can actualize half-forgotten memories and produce a niche for seemingly every remembrance.”
Twice as long as Fiorucci… (1999) and cleft over two sides of wax, the film Dream English Kid 1964-1999AD and its soundtrack expand on its conceptual precedent by dilating its focus from late ‘80s casual and ‘90s rave culture to reflect and refract Leckey’s 35 years on earth before he became a mainstream, world-renowned artist.
Over seven parts, he employs the ubiquitous filters of contemporary culture, the internet and editing software, to traverse a timeline reaching from his birth in ’64 - against a backdrop of The Beatles and astronauts landing on the moon - to end up in the pre-millenial, pre-digital tension of ’99, signified by news reports and licks of Azzido Da Bass’ Doom’s Night, before spiralling into a reverse edited blur.
What occurs between those points forms a mixtape-like reverie of half-cut memories and abstracted, e-motif flashbacks gelled together by swooping, plasmic subs, smoke-clogged filters and uncannily psychoacoustic detail that really comes to life in headphones or with proper amplification.
In case you haven’t already witnessed the film installation, we really don’t want to spoil the surprise any further: but trust that the coming-of-age passage is memorably affective, and his coverage of the post-punk and rave epochs - particularly the MC chatting license plate numbers - are expectedly choice.
Referring to the original sense of the term, nostalgia-as-illness, the piece has a deeply miasmic, febrile sensuality, which, when separated from the visual content, provides an oneiric side-effect all of its own, one which pays testament to the most subtle, psychedelic aspects of Leckey’s genius and broad appeal.
^^^^^^^^^^^^^^^

Out today on the Ghost Box label is a lovely LP by Hintermass  (aka Jon Brooks + Tim Felton) entitled The Apple Tree. 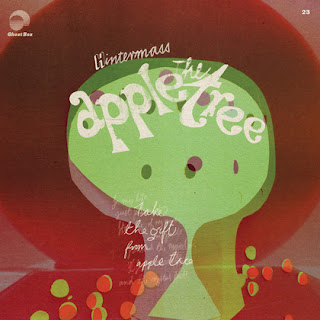 Blurb from the Ghost Box site, where you may purchase the album:

THE GROUP: The Apple Tree is the first LP from Hintermass following their Study Series single for Ghost Box in 2011. The duo comprises Jon Brooks (The Advisory Circle) and Tim Felton (formerly of Broadcast and Seeland).
Both are multi instrumentalists, lending the album its rich texture of electronics, guitar, keyboards, percussion and exotic acoustic instrumentation. The sound is completed by Felton’s rich, warm vocals and Brook’s immaculate production.
SOUND: The Apple Tree is primarily a pop album; mannered and serene with strong electronic and folk sensibilities. This is balanced by expertly handled abstract sketches and instrumental pieces.
INFLUENCES: Both artists cite the kosmiche music of Ash-ra and Popul Vuh and their simultaneous re- discovery of the music of Nico as strong influences on the album. The songs also have clear roots in both traditional and psychedelic folk.
ALBUM: The CD and LP come lavishly packaged with artwork by JulianHouse. The heavyweight vinyl LP comes with a free download code.
^^^^^^^^^^^^^^^
Coming next month via the auspices of the A Year in the Country project: The Quietened Village, featuring contributions from Howlround, Time Attendant, and other parishioners.
Press release:
"The Quietened Village is a study of and reflection on the lost, disappeared and once were homes and hamlets that have wandered off the maps or that have become shells of their former lives and times.
"The album travels from quietly unsettling electronica and tape manipulation via exploratory folk tales and far distant soundscapes; featuring contributions by Howlround, The Rowan Amber Mill (The Book Of The Lost), Cosmic Neigbourhood, Sproatly Smith, The Straw Bear Band (The Owl Service/Rif Mountain), The Soulless Party (Tales From The Black Meadow), Time Attendant, Polypores, A Year In The Country, David Colohan and Richard Moult (both of United Bible Studies).

"Inspired in part by images of sections of abandoned, submerged villages and the spires of their places of worship re-appearing from the surfaces of reservoirs and lakes, alongside thoughts of dwellings that have succumbed to the natural erosion of the coastline and have slowly tumbled into the sea.

"Some of the once were and lost villages which were seedlings for this body of work still stand but their populations are no more, those who lived there evicted at short notice and never to return so that their homes and hearths could be used as training grounds for those who would fight during great conflicts between nations.

"Such points of reference have been intertwined with possibly more bodeful reasons for this stilling and ending; thoughts of Midwich Cuckoos-esque fictions or dystopic tales told and transmitted in times gone by and imagined/re-imagined in amongst the strands of The Quietened Village.

"The album is released as part of the A Year In The Country project - a set of year long journeys through and searching for an expression of an underlying unsettledness to the English bucolic countryside dream; an exploration of an otherly pastoralism, the patterns beneath the plough, pylons and amongst the edgelands.

"It is sent out into the world in two different hand-crafted Night and Dawn editions, produced using archival giclée pigment inks; presenting and encasing their journey in amongst tinderboxes, string bound booklets and accompanying ephemera."


Beg pardon, what is giclée when it's at home?

And finally a lovely track by Auscultation - "haunted house", a literally elegaic ambient-dance piece inspired by a personal loss. From late last year release on the 100% Silk label.